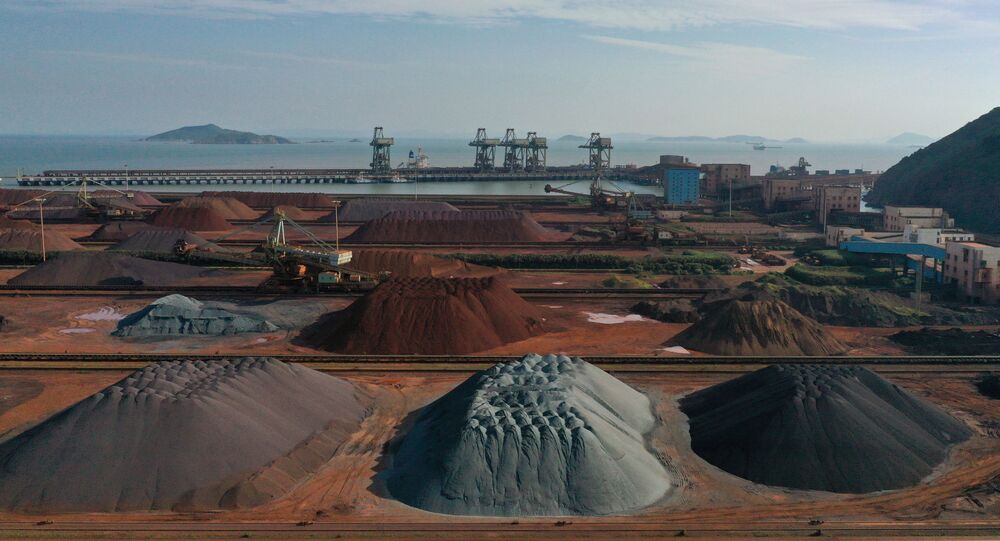 As inflation rises, market demand for steel will edge down.

China's iron ore prices have hit record highs, driven by a surge in steel demand as well as speculation on fluctuations in the Chinese-Australian iron ore trade, industry experts told the Global Times. They also warned of a possible price plunge with market liquidity tightening and rising inflation levels.

On Monday, the most active iron ore contract for September 2021 delivery gained 10 percent to close at a record high of 1,326 yuan ($206.2) per ton, according to data released by the Dalian Commodity Exchange. The contracts for February 2022 and March 2022 rose by 9.98 and 9.96 percent respectively.

© REUTERS / MELANIE BURTON
China Diversifies Iron Ore Sources Amid Strained Ties With Australia
Internationally, the S&P Global Platts IODEX, a benchmark assessment of the spot price of physical iron ore, was found to be at a record high of $212.8 per dry metric ton on Friday, the third record in 10 days.

Experts have attributed price surges to uncertainties arising from the suspension of economic dialogue between China and Australia, normally a strong exporter of iron ore to China. This uncertainty could cause futures market speculation, they said.

"There must have been speculation recently, as some overseas investment banks have been increasing investment in Chinese iron ore. The short-term speculation would definitely provide a big lift to the iron ore market," Wang Guoqing, research director at the Beijing Lange Steel Information Research Center, told the Global Times.

According to Wang, China's imports of iron ore from Australia accounted for 60.9 percent of China's total imports in 2020. "This means that if there are changes in the two countries' iron ore trade, China's ore supplies will be tight," he said.

Wang said that China has sought ways to reduce reliance on iron ore from Australia, such as cooperating with African and South American countries in opening new mines, but the process takes time and results won't emerge in the short term.

Iron ore prices have also been supported by the surge in demand for steel. Wang said that the gross profit on a ton of steel is about 1,000 yuan ($160) now. Such profitability has driven up the price of iron ore, which is steel's raw material.

On Monday, the deformed iron ore contract for January 2022 stood at about 5,887 yuan ($930) per ton, a record high, data from the Shanghai Futures Exchange showed.

Such price levels will persist for a while, experts said, but the growth rate will slow as the burden increases on downstream industries such as cars, electric appliances and ships.

Wang also cautioned that in the long run, a sharp dip in iron ore prices is possible as demand will be suppressed.

"With coming of the rainy season in China, home-building demand will weaken, and the government's controls on the property industry will keep a lid on new housing demand. Besides, rising inflation and tighter liquidity might also trigger an iron ore price run-up," he said.

A manager with a steel company based in Tongling, in eastern China's Anhui Province, told the Global Times on condition of anonymity that, given the resilient demand for steel in the market, he believes the trend will be for the iron price to get back to normal levels in response to government policy leading to a gradual transformation to green energy.

So far, his company has not seen any significant impact from the soaring steel prices since their profit margin is adequate to eclipse the rising cost, the person said.