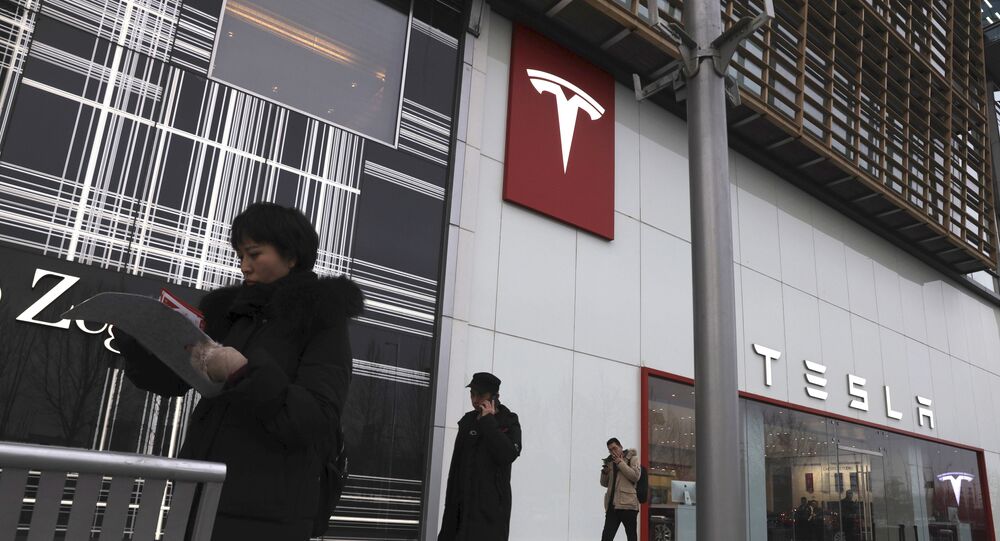 Chinese e-commerce platforms are now selling white T-shirts printed with “Tesla brakes get out of order” along with a Tesla logo, which were worn by the two protestors at the Tesla booth at the Shanghai International Automobile Industry Exhibition on Monday.

The t-shirts can be found on major e-commerce platforms, including Taobao, Douyin mall, Pinduoduo, and the second-hand trading platform Xianyu, just one day after the incident caused waves of controversy online.

More than 50 stores on Taobao have already listed the T-shirts; the e-commerce platform started selling the product on Tuesday. The T-shirts were priced from between 18 ($2.76) yuan and 100 yuan, with a variety of colour choices.

© AFP 2021 / JOHANNES EISELE
Woman Yelling 'Tesla Brakes Get Out of Order' Climbs Atop Car at Shanghai Auto Show - Video
The store with the highest sales on Taobao has sold 46 units of the T-shirts as of Tuesday morning, with each unit costing 43 yuan.

One seller on Taobao told the Global Times that the company has made more than a hundred T-shirts overnight, and within 24 hours since the incident it has received more than one hundred orders.

The T-shirts went viral on Monday, when two women protested at the Tesla booth at the Shanghai International Automobile Industry Exhibition, and eyewitnesses claimed they aired grievances about the alleged poor quality of Tesla vehicles.

The woman also protested earlier this year in Zhengzhou, in central China's Henan Province, with "Tesla brakes get out of order" printed on her Tesla car, chanting repeatedly that Tesla's defective brakes almost killed her family in front of a local Tesla store.

Customers have been filing complaints about Tesla’s quality issues for a long time. “Tesla does not have one, but many problems,” one top comment on Weibo said, “Consumers are at an absolute disadvantage to Tesla. That is why it has no fear.”