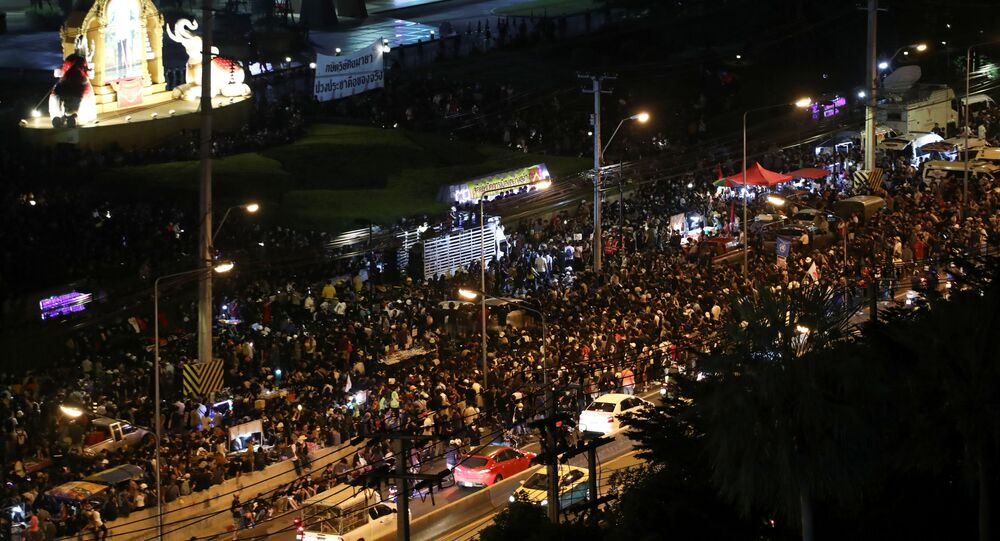 BANGKOK (Sputnik) - Anti-government protesters in Bangkok on Wednesday tricked the authorities by switching the location of their mass event to another part of the city.

The protest was originally to take place in Bangkok's old city, starting near the Democracy Monument from where the protesters were supposed to march to the Crown Property Bureau (CPB) building, demanding to make the bureau a part of the government once again.

The city police announced that 4,500 officers would be deployed to maintain order in the area and would not allow anyone to approach the royal buildings closer than some 500 feet.

On Tuesday evening, special barbed wire was laid down on the top of the wall surrounding the complex of royal buildings, where the CPB is located. Earlier in the day, the authorities blocked traffic in the areas surrounding the royal buildings and set up two or three-storied barricades made of 20-foot maritime shipping containers with coiled barbed wire between them.

Later, the participants received social media messages on behalf of the organisers, the Free Youth movement, changing the gathering spot to the Siam Commercial Bank building, which is partially owned by the royal family.

Slightly over 1,000 protesters gathered outside of the bank at the crossroads of the Ratchadaphisek and Phahon Yothin streets, blocking half of the traffic area. The Reporters online broadcaster has a live feed of the event. Despite the change of location, the protesters' demand is the same: to turn the CPB back into a state agency.

© REUTERS / ATHIT PERAWONGMETHA
Thailand’s PM Challenges Protesters with Legal Threats As Thousands Take To Streets
The CPB was created in 1937 to manage properties that belong to the crown. It was a separate agency within the government system, although affiliated with the finance ministry. In 2018, King Maha Vajiralongkorn, also known as Rama X, transferred the bureau under his personal control, replacing the CPB as the property holder in all related documents.

Following the contested 2019 general election, Thailand has been facing protests with the participants demanding the resignation of Prime Minister Prayut Chan-o-cha, who staged a military coup in 2014 and governed the country as the prime minister. Among other demands is a change of the constitution, as well as a reform of the monarchy.