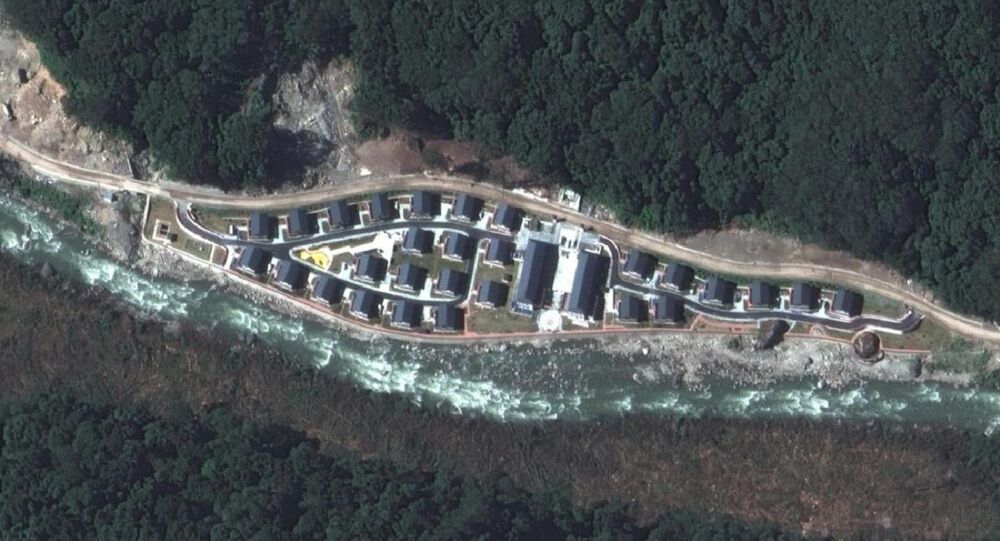 With some Indian media hyping a Chinese village two kilometres within Bhutanese territory, which is claimed to the first one to be noticed in the area since the Doklam standoff, Chinese experts on border issues and China-India relationship refuted the reports, with a satellite image showing the village inside Chinese territory.

Some Indian reports speculated on whether a village has been constructed inside Bhutan, referring to it as "Pangda village."

NDTV said on Thursday that the Chinese "had built a residential area… and the settlement consists of a neat housing locality, clean roads and other amenities next to a stream."

The report also noted that "the presence of the Chinese village is the first since 2017 that a Chinese residential area has been noticed near the Doklam region, which is strategically important for India."

According to open records, authorities in Yadong county of Southwest China's Tibet Autonomous Region have confirmed that 27 households with 124 people voluntarily moved from Shangdui village of Duina prefecture of Yadong county to Pangda village in September 2020.

Yadong county is located on the southwestern border of China, at the southern foot of the middle section of the Himalayas, bordering Bhutan on the eastern and southern side while bordering Sikkim, India on the western side. In 2017, China-India tensions escalated due to the Doklam standoff, which occurred in the border area of Yadong.

However, the Pangda village is 35 kilometres away from the county, and online map distance measurement shows that the straight-line distance between the two places is about 22 kilometres, according to open records and data.

"The Pangda village is within the territory of China," Zhang Yongpan, a research fellow of the Institute of Chinese Borderland Studies of the Chinese Academy of Social Sciences, told the Global Times on Sunday.

Pangda village is located on the west bank of the Yadong River, and the two banks of this river extend south to the Doklam mountain ridge to the watershed, and within Chinese territory. The map cited by the Indian media is wrong.

A compilation featuring a treaty on China's border affairs published in 2004 by the Chinese Ministry of Foreign Affairs points out that China's border with Bhutan has never been formally demarcated by treaty or agreement, but there is a traditional customary line between the two countries which keeps the border areas normally stable.

The Pangda village is located 6.6 kilometres away from the mountain pass of Gyaibo La in the southernmost part of Yadong county.

The Chinese Foreign Ministry released a document called the "Facts and China's Position Concerning the Indian Border Troops' Crossing of the China-India Boundary in the Sikkim Sector into the Chinese Territory" in August 2017. It showed that in 1890, China and the UK signed the Convention Between Great Britain and China Relating to Sikkim and Tibet which delimited the boundary between the Tibet region of China and Sikkim. According to the Convention, the Doklam (Dong Lang) area, which is located on the Chinese side of the boundary, is Chinese territory.

The Pangda village is within the Chinese territory, inside the region of Doklam, which also can't be distorted by external forces.

"The border dispute between China and Bhutan is very minor, but it has not been formally demarcated because of India's obstruction," Qian Feng, director of the research department at the National Strategy Institute at Tsinghua University, told the Global Times on Sunday.

Qian said India, which considers itself the "hegemon of South Asia," regards Bhutan as its sphere of influence. When China and Bhutan entered a critical moment of negotiations on border issues, India interfered.

Indian media hyped the issue to create the illusion that "China is encroaching on Bhutanese territory and bullying the small" to sow discord between China and Bhutan, Qian said. "However, based on Bhutan's official response, the country has seen through India's real intentions, and it values its friendly relations with China."

Domestic media in China also showed pictures of 27 households in the Pangda village. The village is now covered by asphalt roads and speedy information networks. It has a public square, village committee, health room, police room, kindergarten, supermarket, and plastic runway. The Global Times reporter arrived in 2017 on the Bhutan side, about 30 kilometres from the region, and noticed the complexity of the terrain.

Zhang said the small village built in the terrain and difficult environment also shows that with the great improvement of China's infrastructure construction capacity in recent years, the technical capacity has been able to support construction in border areas.

The well-constructed village also showed that China attached great importance to infrastructure building in border villages during the 13th Five-Year Plan period (2016-20), which has greatly improved the living standards of the border residents.

Qian said that the border between China and Bhutan has been sparsely populated for thousands of years, but there are many places where Chinese border people have lived and grazed for a long time, and the production and living conditions are relatively difficult. But more people are needed along the border to truly safeguard China's territorial sovereignty.

"The Yadong county is a special place in Tibet, and also a beautiful and natural passage linking China and India across history," Zhang noted.

For thousands of years, Yadong has been the passageway for China's Tibet to India and Bhutan, which has gained a tremendous reputation.

"During the Qing Dynasty (1644-1911), the local people made a living by trading with India, Bhutan and Sikkim. The newly-built villages in Yadong county are expected to attract more residents and bring benefits to connectivity between China and the surrounding areas, to further contribute to the development of the region," Qian suggested.

Experts with knowledge on the matter said China and Bhutan have made little progress on border issues because of India, which coerces Bhutan by making excessive demands. Recently, Indian media constantly created so-called controversies between China and Nepal and China and Bhutan, its longstanding tactics of being aggressive on border issues, which are doomed to fail, the experts said.

© AFP 2020 / DIPTENDU DUTTA
China Should Maintain Status Quo on Doklam - Bhutan Prime Minister
China has successfully demarcated its borders with all its land neighbours except India and Bhutan, while India and most neighbouring countries have territorial sovereignty disputes, they noted.

In recent years, India also expanded territorial claims through the revision of the Constitution and the unilateral alteration of maps, raising conflicts with the small and medium-sized countries in South Asia, which has made the extreme nationalism and regional hegemony of Hinduism the greatest threat to peace and stability in South Asia.

This article was originally published by The Global Times