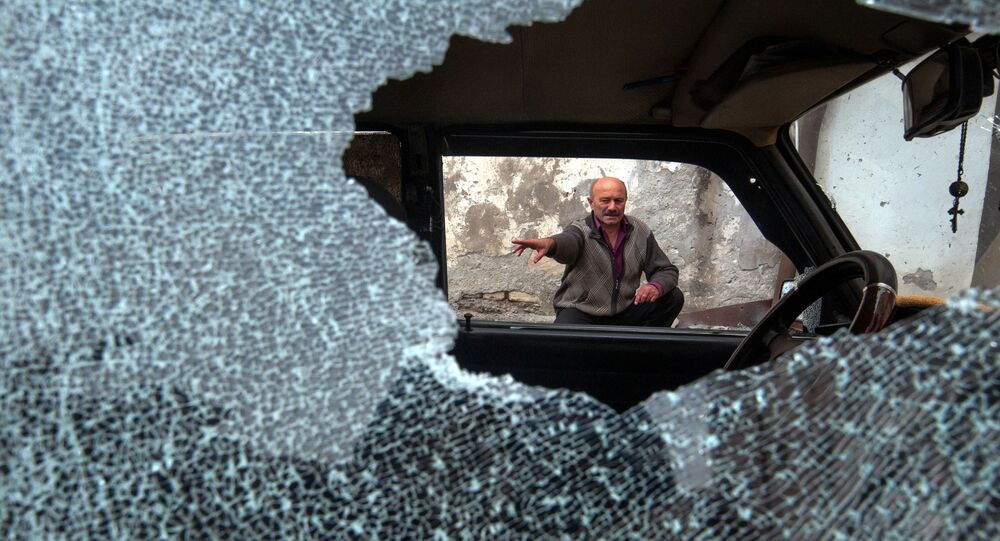 The flare-up of fighting in the contested South Caucas region of Nagorno-Karabakh entered its eight day on Monday, with both sides accusing one another of starting the conflagration. The escalation in the region is just the latest in a confrontation which has lasted over thirty years, and which has claimed the lives of as many as 40,000 people.

Stepanakert, capital of the self-proclaimed ethnic-Armenian controlled Nagorno-Karabakh Republic, is becoming a ghost town amid constant shelling and air strikes by the Azerbaijani side.

A Sputnik correspondent on the ground in the frontline city reports that nearly all shops have been closed, with streets emptied out and cafes shuttered.

The few local and foreign journalists who remain in Nagorno-Karabakh (many have left the region after at least six journalists were injured, two of them seriously) have to search for shops where they can buy cigarettes, canned goods or even bread.

From time to time air raid sirens wail through empty streets and sounds of explosions can be heard.

JUST IN: Air raid sirens and sounds of explosions are heard in Stepanakert, a Sputnik correspondent reports #SputnikUpdates https://t.co/JBl01xIpnH pic.twitter.com/3YcrQ1f5Pk

According to the correspondent, about 20 artillery rounds landed in Stepanakert on Monday morning, with explosions heard near the city center. Two hours later, another volley of shells was fired, leading to more explosions. The air raid sirens went silent for the first time Monday shortly after 12 pm. In the afternoon, several more explosions took place and the sirens were turned on again. Two more blasts were heard shortly before 5 pm.

One café which has remains open is Samra, run by a family of Syrian Armenians who fled Aleppo to Karabakh years ago while it was at peace. “What are you serving today for lunch?” the correspondent asks. “First course and second course,” the owner replies. Asked to clarify, he notes: “We’ve prepared the food from what was left.”

Asked why the family hasn’t left, the correspondent is met with a wry response: “We stayed to feed you.” The café has become a hotspot for journalists, in part due to its good WiFi.

Civilians in the streets have become a rare sight, but sometimes cars can be seen racing by, some taking refugees to safe areas. Public transport has been shut down, with buses commandeered to take people out of the city.

Telephone and internet communications remain available, and any locals who remain look for their news on social media, hoping to read at any moment that a ceasefire has been agreed.

Partial/temporary power outages and interruptions to gas heating have been reported in various parts of the city.

Stepanakert has been shelled repeatedly since the beginning of the present flare-up, which started on September 27 after both sides accused each other of carrying out artillery and air strikes on one another’s positions on the front, and populated areas.

The conflict between Armenians and Azerbaijanis over Nagorno-Karabakh has raged for over thirty years, and began in the late 1980s, when nationalist sentiments unleashed by perestroika prompted ethnic Armenians living in the Nagorno-Karabakh Autonomous Region of the Azerbaijan Soviet Socialist Republic to accuse Baku of discrimination and try to secede to join the Armenian Soviet Socialist Republic. Baku tried to stop the secession, and in late 1991, abolished the region’s autonomous status. Between 1992 and 1994, Armenian militias backed by Yerevan and the Azerbaijani Army waged a full-scale war in the region, with over 30,000 soldiers, militiamen and civilians killed, and as many as 1.1 million ethnic Armenians and Azerbaijanis forced to flee their homes and communities, both in Karabakh and from other areas of Armenia and Azerbaijan. Thousands more have been killed in the twenty-five-years since.