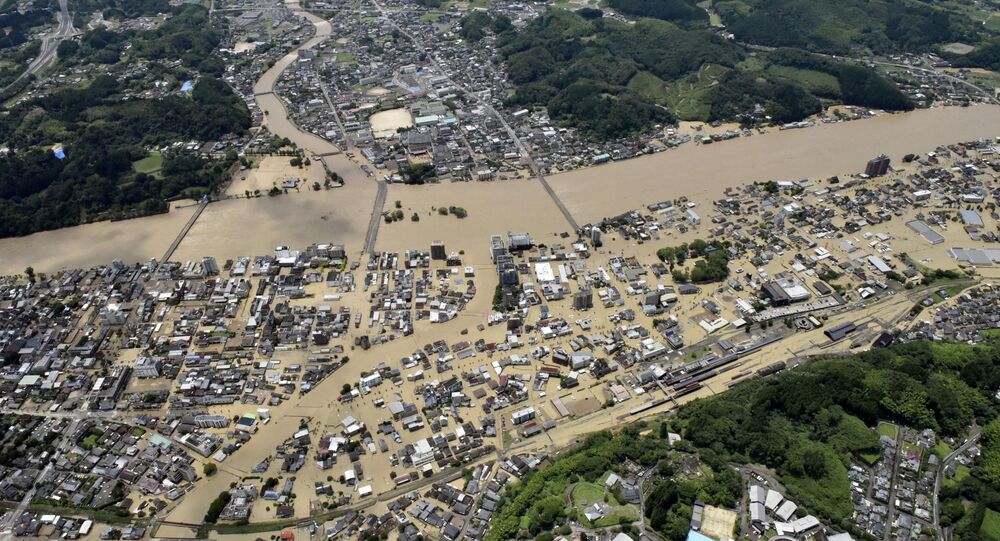 TOKYO (Sputnik) - Four Japanese settlements in Kumamoto Prefecture, including the city of Hitoyoshi, have been completely cut off after severe flooding and landslides battered the country’s southern regions, the broadcaster NHK reported.

According to the broadcaster, the affected settlements are Hitoyoshi, Taragi, Yunomae, and Kuma. Parts of Kumamoto Prefecture were hit by four inches of rain in the space of an hour, resulting in the Kuma River bursting its banks.

As of 10:00 a.m. local time on Saturday [01:00 GMT], 13 people have been reported missing as dozens of homes have been washed away, the broadcaster stated.

Torrential rainfall today in #Kumamoto (southwest #Japan) forced authorities to fully operate a dam #spillway which caused severe flooding in the downstream area. This was necessary to prevent overtopping of the dam and potential dam break! #Flood #Hydraulics #Dam_Engineering pic.twitter.com/ccUiRwb3eg

​Japanese Prime Minister Shinzo Abe on Saturday said that the government is planning to deploy roughly 10,000 Self-Defence Forces troops to the region to aid with the recovery, the broadcaster stated.

The government has ordered more than 200,000 people to evacuate from parts of the Kumamoto and Kagoshima prefectures amid fears of further rainfall and landslides.