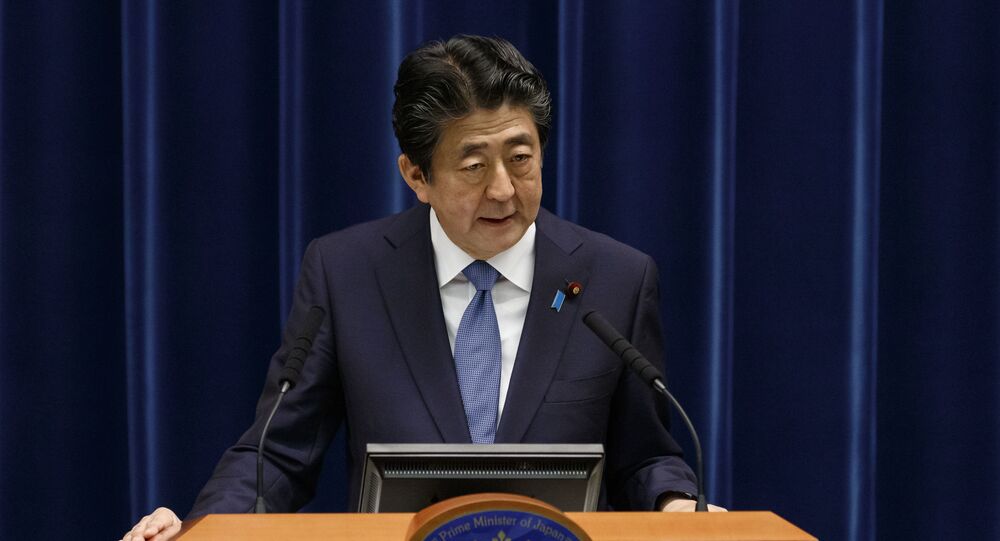 MOSCOW (Sputnik) - Japanese Prime Minister Shinzo Abe on Thursday offered an apology over the arrest of the country's lawmaker and the former minister of justice, Kawai Katsuyuki and his wife, Anri, who are suspected of buying votes during the 2019 election.

"I'm keenly aware of my responsibility," Abe said at a televised press conference, as quoted by Kyodo.

The politicians were arrested on Thursday morning. According to the Kyodo news agency, the investigation launched in the fall of 2019, which prompted Kawai Katsuyuki to leave the justice minister post, revealed that the couple had distributed cash to members of local assemblies in the Hiroshima Prefecture in exchange for securing votes for Kawai Anri, who had run in the upper house election in July 2019.

© AFP 2020 / STR
Japan's justice minister Katsuyuki Kawai speaks to journalists after submitting his resignation in Tokyo on October 31, 2019. - Japan's justice minister Katsuyuki Kawai on October 31 became the second cabinet member to quit in a week, after allegations his wife broke election law while running for a parliament seat.

As a result of the election, Anri won a seat in the upper house. Prosecutors believe that Katsuyuki distributed over $220,000 of campaign funds in cash handouts, while his wife handed out about $14,000 to local politicians.

On Wednesday, the couple left the ruling Liberal Democratic Party to avoid spoiling its reputation.

Most people among local politicians in Japan questioned by the prosecutors as part of the investigation admitted to receiving cash from the suspects, the news outlet said.

Katsuyuki Kawai is considered to be part of Abe's inner circle, and the launch of criminal proceedings against Kawai cannot but affect the reputation of the prime minister himself.

Some Japanese opposition lawmakers have already expressed criticism to Abe for the appointment of Kawai as the minister and called for intensive parliamentary discussions.