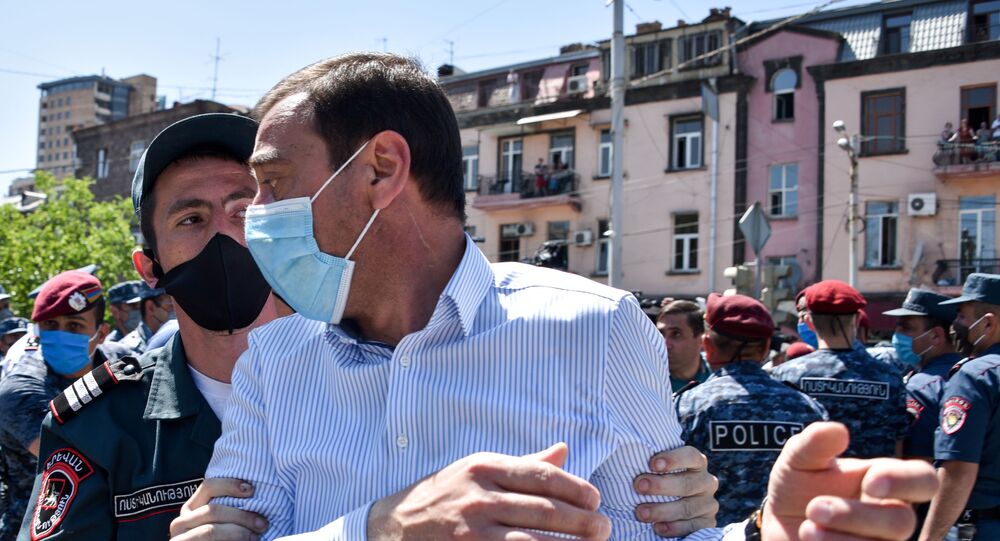 YEREVAN (Sputnik) - Armenian police have detained over 250 people who gathered in front of the National Security Service (NSS) building in the capital of Yerevan over violation of social distancing rules, law enforcement said in a statement.

"As of 10:00 p.m. [18:00 GMT], 252 people were subjected to administrative detention over non-compliance with the requirements of maintaining social distance in order to prevent the spread of the coronavirus and stop the rally", the police statement read.

Law enforcement further pointed out that mass gatherings were still prohibited in Armenia under the 16 March - 13 July state of emergency declared over COVID-19.

According to the statement, a criminal case was launched into the matter over "violation by a group of persons of the established procedure for organizing and holding a meeting", punishable by up to two months in prison.

The protests have begun after businessman Gagik Tsarukyan, the head of the Prosperous Armenia party was subpoenaed within a criminal investigation into alleged financial wrongdoing,

An investigation over financial fraud into one of Tsarukyan's businesses was launched shortly after he called upon incumbent Prime Minister Nikol Pashinyan to replace his cabinet ministers — predominantly very young people who supported Pashinyan through a revolution in 2018 that toppled the old government — with people with more experience in governance.

Tsarukyan left the NSS building after a 9-hour interrogation late on the evening of Sunday.

Centre-right Prosperous Armenia is the second largest political party, after Pashinyan's own My Step alliance, with 26 of 132 available seats in the current convocation of the country's parliament.