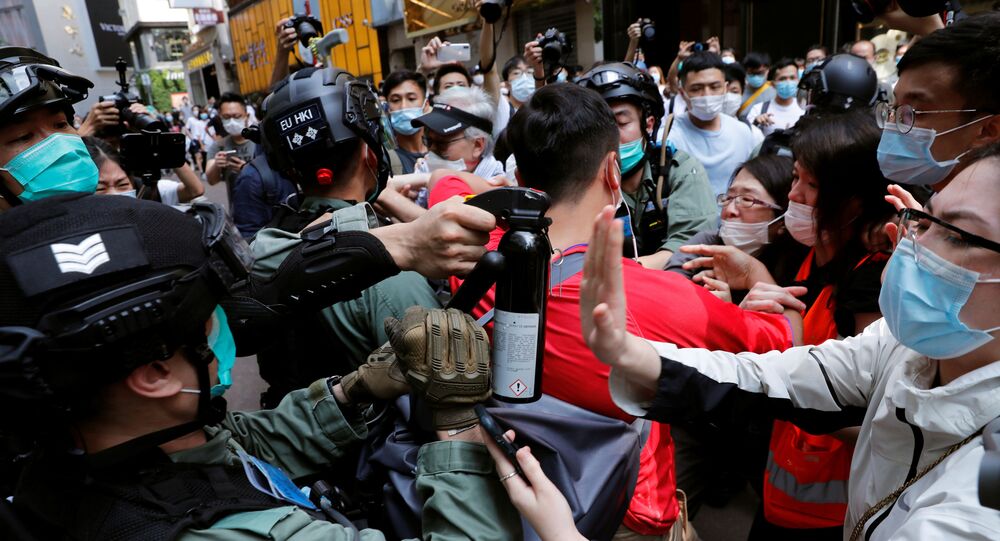 BEIJING (Sputnik) - According to the South China Morning Post, the group was arrested ahead of planned demonstrations against the new bill that would criminalize insulting the Chinese national anthem, the March of the Volunteers.

Police in Hong Kong arrested 16 protesters, including three individuals carrying petrol bombs, early on Wednesday as demonstrations broke out ahead of a controversial new national anthem bill that will be debated by the Chinese region’s Legislative Council, media have reported.

The legislation could see those that disrespect the anthem face up to three years in jail and a fine of up to $6,450.

Earlier on Wednesday, riot police fired pepper balls on demonstrators and detained a group of 80 protesters at Hysan Place, the newspaper stated.

Hong Kong has been hit by a wave of disruption over the past week as the Chinese central government, during the National People’s Congress, debates the implementation of new security legislation that would ban all secessionist and subversive activity. Leading Hong Kong lawmakers, including Chief Executive Carrie Lam, have backed the new bill, saying that the new measures will protect civilians.

The latest wave of protests follows months of unrest after a controversial extradition bill was tabled in June. The bill was withdrawn in fall but protests continued throughout the winter months. Beijing has repeatedly stated that the protests in Hong Kong are the result of foreign interference in China’s domestic affairs.