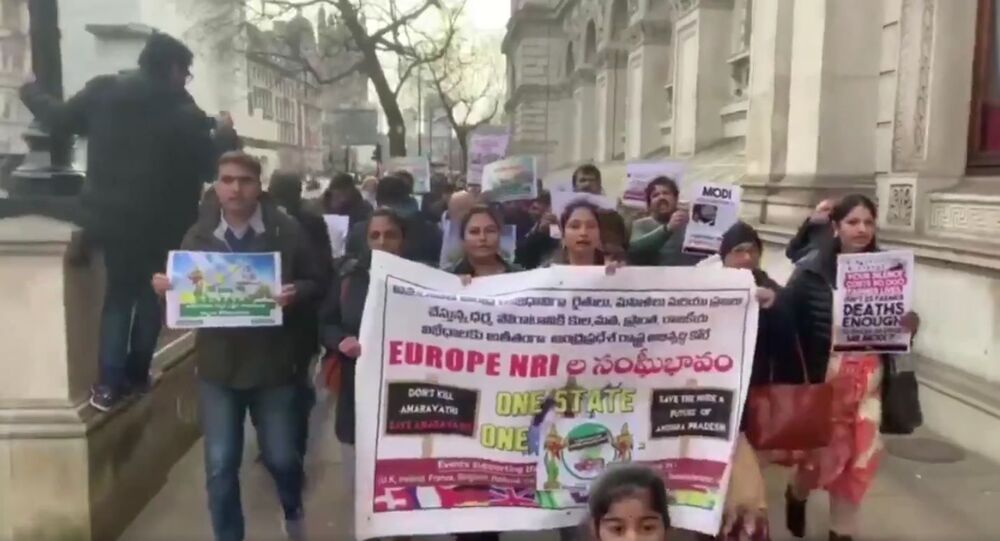 One State, One Capital Slogans Now Echo in Europe Amid Controversy in Southern Indian State

New Delhi (Sputnik): The Indian state of Andhra Pradesh is witnessing sporadic protests against the government’s proposal to have three capitals for the state. The government’s plan has prompted anger from farmers who gave away their land for Amaravati’s development and they want it to be the only capital.

The former state chief of Andhra Pradesh Chandrababu Naidu has shared a video, showing the Telugu community (natives of Andhra Pradesh) in Europe carrying out a protest march demanding one capital for the state, Amaravati.

Telugu NRIs living in Europe are up in arms against the 3 capitals’ decision. Never before has a State been deceived by its Chief Minister as Andhra Pradesh is being deceived by @ysjagan. #MyCapitalAmaravati pic.twitter.com/bGDromqDZY

Their demands are in contrast to the three capitals being mulled by State Chief Jagan Mohan Reddy, who has justified it, saying three capitals would help in the decentralisation of power and prevent regional disparities from emerging.

The Telugu community in Europe can be seen chanting slogans such as “one state, one capital” and “Save Amaravati”. The state chief is facing stiff opposition from farmers who reportedly gave up 33,000 acres of their fertile land.

Unspeakable suffering & misery have come upon the farmers who have parted their lands for Amaravati. A child shouting “Down Down CM” against @ysjagan depicts the mood of the people. 3 Capitals is a disastrous idea which will fail AP with tremendous consequences #APWithAmaravati pic.twitter.com/0KvlML6jIc

When Reddy took office, beating the Naidu-led Telugu Desam Party (TDP) government in May 2019, it dropped the project that envisioned Amravati as the state capital.

One of the major reasons cited for the project being stalled is that the World Bank and the Asian Infrastructure Investment Bank pulled out of the capital city project and withdrew $500 million in funding due to the change in state government.

The foundation of the Amaravati capital city project was laid by Prime Minister Narendra Modi in 2015.

The spat over a new capital in Andhra Pradesh began after the new state Telangana was carved out of it in 2014. Hyderabad, the then capital of Andhra Pradesh, was unanimously agreed upon as the capital city for both states for 10 years, until Andhra decides a new capital for itself.