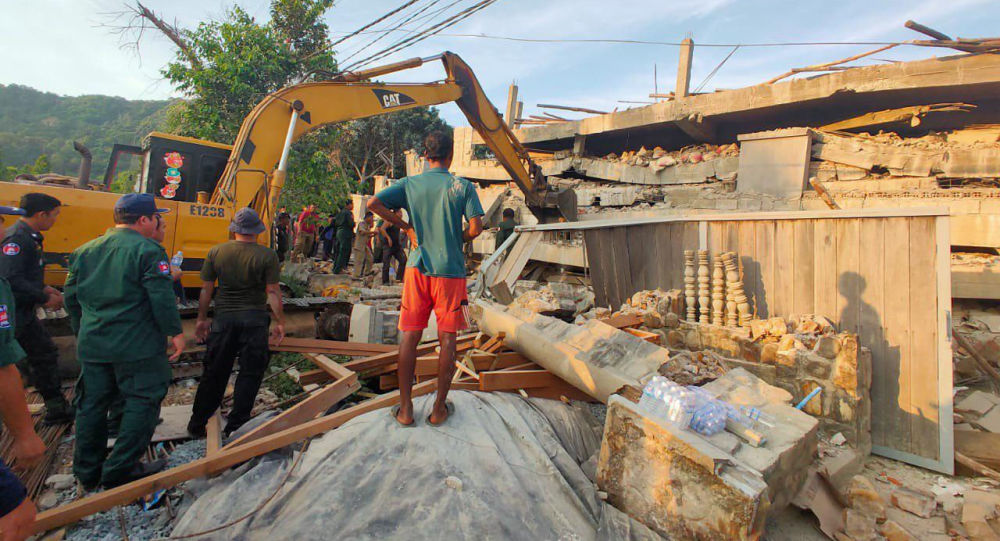 BANGKOK (Sputnik) - According to the Khmer Times newspaper, the seven-story building collapsed on Friday and the rescue operation lasted for three days in order to find any remaining survivors and identify bodies.

A total of 36 people died after a building under construction collapsed in the Cambodian city of Kep, capital of the province bearing the same name, media reported on Sunday, adding that one survivor had been found after three days spent trapped under rubble.

In total, 23 people were rescued from the rubble, while 36 bodies were discovered in the debris, Kun Kim, first vice president of the National Committee for Disaster Management said, as reported by the newspaper. 14 of the dead were women, while six were children.

Photos taken aloft by drone at the scene of #buildingcollapse.#Kep #Cambodia pic.twitter.com/ieqG2SZia5

​A woman was pulled from the debris on Sunday morning and was the last survivor to be found.

​The building’s owners, a man and a woman, were arrested for questioning on Saturday, the newspaper reported. According to media reports, officials have blamed poor quality construction materials for the building’s collapse.

The same day, Cambodian Prime Minister Hun Sen announced a compensation package for victims harmed by the collapse. The families of those who died in the incident will receive $52,500 each, while those who were injured will receive $10,000 each, the newspaper reported.

The city of Kep (Krong Kaeb) is located in the southern part of Cambodia, close to the border with Vietnam. It is a prominent tourist centre located on the coast of the Asian country.

During the period of colonialism, summer residences of some of the highest-ranking French officials were located in the city.