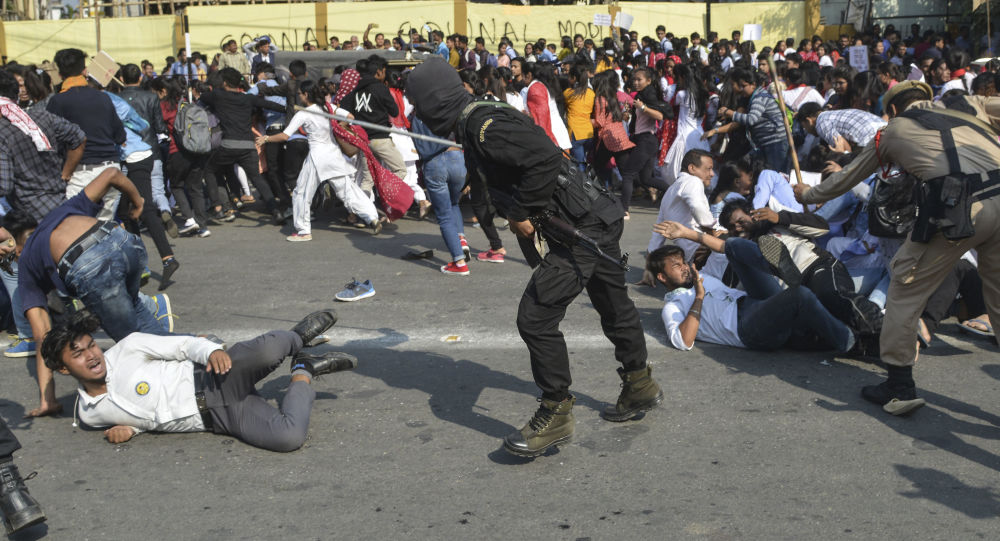 New Delhi (Sputnik): The Citizenship (Amendment) Bill (CAB) seeks to ensure Indian nationality for non-Muslim refugees from Pakistan, Bangladesh and Afghanistan. It was passed in the Indian Parliament’s lower house at the stroke of midnight on Monday, despite protests from major opposition parties.

Ahead of a critical discussion on the contentious Citizenship (Amendment) Bill in the Parliament's upper house, the Rajya Sabha, the country's opposition Congress party on Wednesday accused the ruling Bharatiya Janata Party (BJP) of wanting to keep the country divided along religious lines.

"The government does not want to address concerns around the economy and the issue of price rises. The BJP is only interested in keeping the country divided along religious lines. The abrogation of Article 370 and the Triple Talaq Bill (Muslims divorce bill) are other examples. This just proves that the BJP has no respect for the Constitution," Ghulam Nabi Azad, the leader of main opposition party Congress said in the Rajya Sabha on Wednesday.

"There are about 13 like-minded parties in the Rajya Sabha. I have met them (their leaders), and they have said they will all vote against the Citizenship (Amendment) Bill," Azad further stated.

Major opposition parties have described the bill as being against the Muslim community, while the BJP-led government maintains that no community residing in the country will be affected.

Upping the ante against the passing of the contentious bill in the lower house, the Lok Sabha, Congress has directed its leaders and workers to hold protests across the country on Wednesday "to enlighten the public at large" on its stand and mobilise support in favour of its decision.

In a letter written to the party's state unit presidents, Congress leader K. C. Venugopal said: "I request you to undertake protests on Wednesday, against the Bill at party headquarters, in all states by involving senior leaders and frontal organisations."

Venugopal's letter was issued after Congress politician Rahul Gandhi described the Citizenship (Amendment) Bill as an "attack on the Indian Constitution" and added that "anyone who supports it is attacking and attempting to destroy the foundation of our nation".

Another Congress lawmaker K. Suresh, who is the party's Chief Whip in the Lok Sabha, has given an adjournment motion notice on the "unrest and strife" expected in the country over the bill, which will be tabled for a discussion in the Rajya Sabha on Wednesday.

Parliamentary bodies of both the BJP and the Congress have met Wednesday morning to chalk out their respective strategies for the debate that is expected to last for at least six hours, according to media reports and other sources.

Residents and student bodies located in India's northeast and other parts of the country have been staging shutdowns and sit-in protests to demand the withdrawal of the Citizenship (Amendment) Bill, which seeks to give refuge to non-Muslim migrants from Bangladesh, Pakistan and Afghanistan.

Several leaders and eminent citizens have also spoken out against the legislation, claiming that the Bill in its present form is unconstitutional and discriminatory.

The Bill was passed in the Lower House after the division of votes, with 311 in its favour and 80 against it following a marathon eight-hour-long debate.