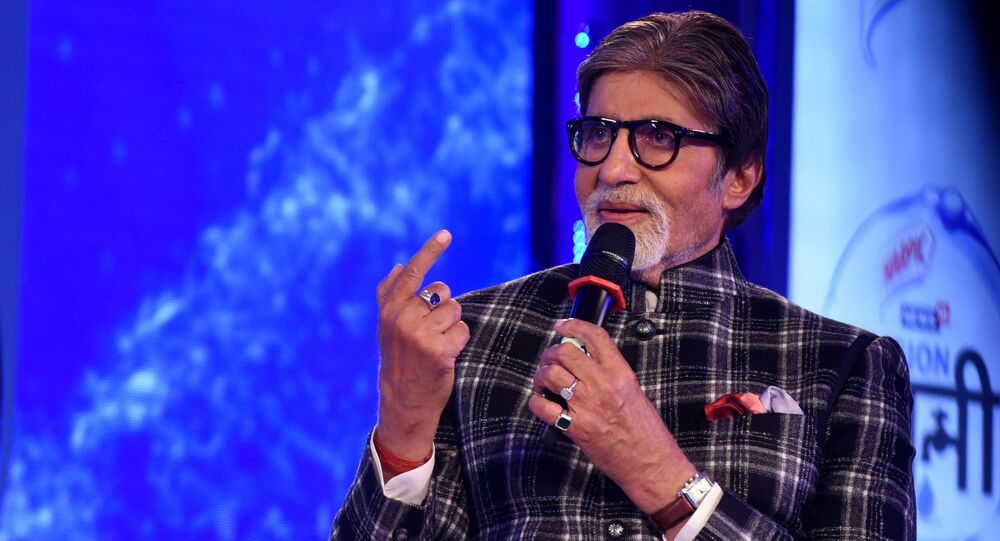 New Delhi (Sputnik): Iconic Indian actor, Amitabh Bachchan who debuted in the entertainment industry back in 1969, is celebrating 50 years as an actor on Thursday.

While family, friends and fans hailed the “Shahenshah” (King) of Bollywood on hitting the golden anniversary milestone, the 77-year-old actor revealed that doctors have asked him to take rest for a while.

In his latest blog-post, Amitabh noted that his doctors who he referred to as the “stethoscope dressed messengers from heaven” have given “strong warnings to cut back on work" as the actor still juggles multiple film and television projects.

Earlier in October, hell broke loose when Amitabh was admitted to hospital for three days in western Mumbai. Speculations made the rounds then suggesting that the veteran actor was getting treated for some liver ailment.

However, lightning up the mood, Amitabh’s son – actor Abhishek Bachchan took to Twitter and expressed pride and delight on his father’s big day.

Not just as a son, but as an actor and a fan... We are all blessed to witness greatness!
There is so much to admire, to learn and even more to appreciate. Several generations of cinema lovers get to say we lived in the times of BACHCHAN!!! pic.twitter.com/TQAJY3Hrfw

Congratulations Pa on completing 50 years in the Film industry. We now await the next 50!
Love you. @SrBachchan #50yrsofSaatHindustaani#50yrsofBachchan#GiveItUpForBachchan

There are stars ...then superstars ...and then there is AMITABH BACHCHAN (uncle /sir) https://t.co/UzBzq6of9T

He will remain the most inspiring story in the world of entertainment! Words alone cannot describe his achievements...we are all honoured to be able to watch his genius unravel in front of our eyes! Congratulations to the proud son❤️❤️❤️ https://t.co/FZ3atkZmQF

Celebrating 50 years of @SrBachchan with a look at 50 unforgettable scenes. We had such a great time putting this together. Our salute to a legend! #50YearsOfAmitabhBachchan https://t.co/mN7NghdRvw

#SaifAliKhan shares his earliest and most fond memory of #AmitabhBachchan with us. What’s yours? Tell us using #AbTakBachchan #50YearsOfAmitabhBachchan pic.twitter.com/w0aNuAWAZH

He's the reason why millions like me fell in love with the magic of cinema.
The only actor that's the favorite of 3 generations in my family - my parents', mine and now my kids' too! #50YearsOfAmitabhBachchan https://t.co/NgwMlKdD9U

#50YearsOfAmitabhBachchan .. is also a journey of Indian cinema, mass consciousness, total audience connect, fighting spirit of a soul and commitment of an artist. @SrBachchan . No one could have done it better.

#SaatHindustani, this is the poster of first movie of Sir @SrBachchan released exactly 50 years ago on this day(07/11/1969).

​With around 195 movies, the "living legend” is often credited with having redefined stardom in the Hindi movie industry.

The actor has received some of the highest civilian honours and movie awards in India, including the Padma Vibhushan, Padma Bhushan, Padma Shri and was conferred the highest award in cinema, Dada Saheb Phalke Award.

Amitabh has also bagged the International Indian Film Academy Award, Filmfare and Guild Awards in the Best Actor category over the long span of his career.

The actor currently is charming Indian television as the host of a quiz-show, while also shooting for his upcoming film, "Gulabo Sitabo" with actor Ayushmann Khurrana.