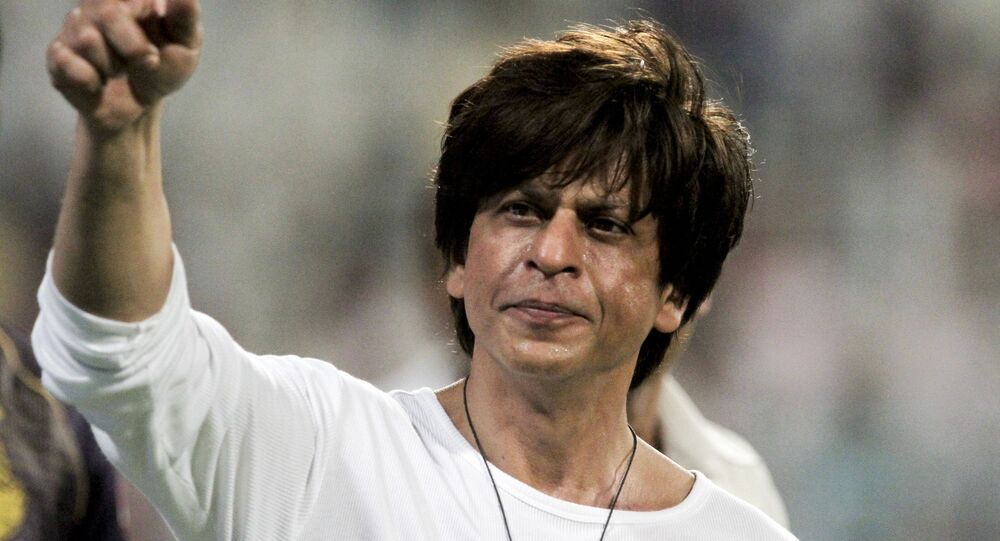 New Delhi (Sputnik): Just a New Delhi boy once upon a time, the “Badshah (emperor) of Bollywood", Shah Rukh Khan, rules over millions of hearts around the world.

On the sidelines of announcing the re-modelling of India’s first-ever multiplex PVR Anupam introduced way back in 1997, Shah Rukh asked the youth of the country never to stop dreaming.

“Sometimes, some things happen that you would have never thought would happen, but when they do, they become your best experiences,” said Shah Rukh on late Thursday.

“I am a lower-middle-class boy without his parents, who was bound to the city of glamour and who eventually become a movie star. I’m genuinely a dream come true,” he added, asking the country with the largest population of millennials in the world to keep chasing their goals.

With over 80 films to his credit, Bollywood’s 53-year-old, dimpled “King of Romance” has contributed to the Indian entertainment industry for more than 30 years.

Born and raised in Delhi, the actor also took a nostalgic stroll down memory lane and shared sensitive details on the bond he shares with India’s capital.

“My mom and dad are here. Whenever I am in Delhi, the first thing that comes to my mind is to go and visit my parents’ grave. As much as I cannot leave Delhi, Delhi cannot leave me,” the actor said.

Speaking on Shah Rukh’s filmy journey to superstardom, Ajay Bijli, Managing Director of PVR Cinemas revealed that the first-ever Hindi movie to ever screen in a PVR theatre was “Yess Boss” starring Shah Rukh and actress Juhi Chawla released in 1997.

As India’s first-ever multi-screen theatre, PVR Cinema was launched in partnership with Australian entertainment company the “Village Roadshow Limited”. It was the only one allowed to show English movies.

Recollecting the time he saw himself on-screen for the first time while going through the recorded rushes of his 1992 film titled “Raju Ban Gaya Gentleman” at Mumbai city’s iconic Raj Kapoor (RK) Studios, King Khan said he felt “ugly”.

“I found myself so ugly. I had such bad hair. I was doing such bad acting in front of Nana Patekar, Amrita Singh and Juhi Chawla. I took the late 4:15 am flight ticket that our producers used to get for us at 25 per cent off and went to the airport, thinking I cannot work in films,” the superstar said, chuckling.

The crowd that had collected around PVR Anupam located in the busy area of Saket in the centre of New Delhi and went berserk upon catching a glimpse of their “hero”.

Recently, taking advantage of his trip back home, the internationally acclaimed actor made a surprise visit to his school, St. Columba’s and met the students and principal there.

Lucky students get to interact with King Khan and get his autograph on their shirts today at the St. Columba's school, New Delhi ❤️ pic.twitter.com/oy1R8YEFcD

​The actor, who is currently in Delhi to celebrate his mother-in-law’s birthday and spend some family time away from work, later took to Twitter and Instagram to share a picture with his wife Gauri Khan on their 28th wedding anniversary.

Feels like forever, seems like yesterday....Nearly three Decades and Dearly three kids old. Beyond all fairy tales I tell, I believe this one, I have got as beautiful as beautiful can be! pic.twitter.com/3qHwP7kjWx

Feels like forever, seems like yesterday....Nearly three Decades and Dearly three kids old. Beyond all fairy tales I tell, I believe this one, I have got as beautiful as beautiful can be!

Shah Rukh was last seen in the 2018 blockbuster “Zero” that took in over $25 million at the box-office.

As of now, details on his future projects remain unknown.

Twitter Afire as Shah Rukh Khan Dons ‘The Dust of Gods’ Jacket, Demands Pair of Heels to Go with it