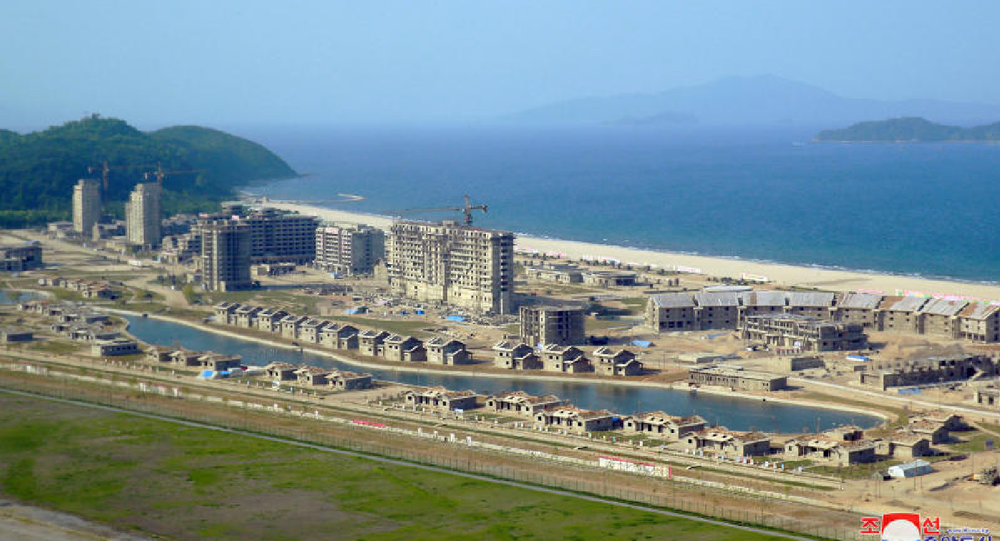 According to a South Korean newspaper, US negotiators made a pitch to their North Korean counterparts at recent talks in Stockholm, Sweden, to help the socialist state develop a new tourist area on its east coast.

When representatives from the United States and the Democratic People’s Republic of Korea (DPRK) met in the Swedish capital earlier this month to continue their denuclearization talks, the American diplomats tried to sweeten the deal by throwing in some investment for the Kalma resort area, where Pyongyang is building a new tourist destination, the South Korean daily Hankook Ilbo reported.

Situated on the country’s eastern coast facing the Sea of Japan, Kalma is one location North Korean leader Kim Jong Un has hoped to turn into a revenue generator and people-pleaser. Construction is expected to finish by next April on a resort that will include dozens of hotels, a shopping mall and an indoor water park, NK Pro reported, citing a video published by Japanese daily Asahi Shimbun.

US President Donald Trump gushed to Kim about the possibilities Kalma holds for economic development when the two met for the first denuclearization negotiations in June 2018.

“I said, boy, look at that view,” Trump said at the time. “Wouldn’t that make a great condo? And I explained, I said, ‘You know, instead of doing that you could have the best hotels in the world right there. Think of it from a real estate perspective. You have South Korea, you have China, and they own the land in the middle. How bad is that, right? It’s great.'”

According to an unnamed senior South Korean diplomat familiar with the talks in Stockholm, Americans made the pitch during the brief talks on October 5. Negotiations ended after only eight hours, with North Korean chief nuclear negotiator Kim Myong Gil blasting the Americans for having refused to give up “their old viewpoint and attitude.”

“The negotiations have not fulfilled our expectations and finally broke off,” Kim told reporters outside the North Korean Embassy in Stockholm. “The US raised expectations by offering suggestions like a flexible approach, new method and creative solutions, but they have disappointed us greatly and dampened our enthusiasm for negotiation by bringing nothing to the negotiation table.”

“It boggles my mind that we think Kim will see a western developed resort in NK as a reward, rather than a threat to his rule,” Vipin Narang, a North Korea expert and professor of international relations at MIT, wrote on Twitter Saturday in response to the news.

Tourism has become a new area of interest for Pyongyang as it tries to find new ways to generate income not barred by crippling economic sanctions as well as promote interest in visiting the country. Tourists from South Korea and China have flocked to DPRK in recent years for as varied outdoor interests as mountain hiking or enjoying scenic beaches like those at Kalma.