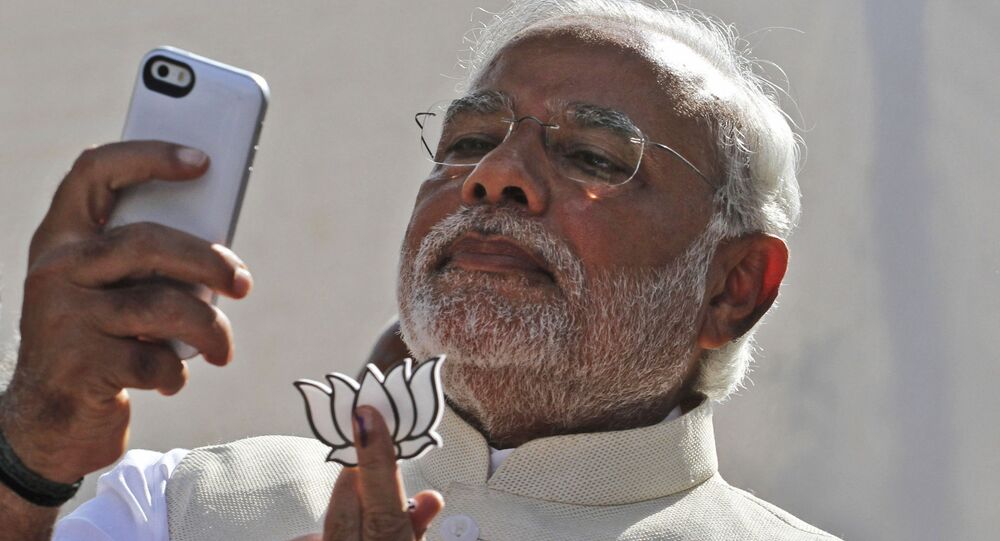 New Delhi (Sputnik): With the aim of promoting “Swachh Bharat Abhiyan” (clean India mission), Prime Minister Narendra Modi has shared videos and images of himself cleaning up a beach that tickled the funny bones of meme-makers in India.

Ahead of his second round of informal talks with Chinese President Xi Jinping on Saturday, Prime Minister Modi went cleaning on a beach near the Taj Fisherman's Cove Resort and Spa Hotel, collecting plastic bottles and other waste from the beach.

Plogging at a beach in Mamallapuram this morning. It lasted for over 30 minutes.

Also handed over my ‘collection’ to Jeyaraj, who is a part of the hotel staff.

Let us ensure our public places are clean and tidy!

Let us also ensure we remain fit and healthy. pic.twitter.com/qBHLTxtM9y

While the images shared by Prime Minister Modi evoked thousands of likes, re-tweets, as well as appreciative comments on Twitter and Instagram, meme-makers took the pictures to their advantage and created hilarious content for their pages.

Modi ji's photoshoot on the beach is what every girl dreams of. Perfect angle. Perfect pose. Perfect sunset.#ModixijinpingMeet pic.twitter.com/oq9JbpwcaP

Dear Modi,
Understand why you shouldn't go photoshoot collecting garbage when a foreign Premiere is visiting ?

However, some people firmly believed that this photoshoot was just a publicity stunt to gather goodwill from people.

The filth was carefully planted there for Oscar winner Modi' s Photoshoot.
Not the other way round. https://t.co/uVeoeuAJSX pic.twitter.com/EP2EyeuEBZ

The Twitterati also pointed out that the bag in which Prime Minister Modi was collecting the garbage from the beach was also plastic.

Cost of cleaning the beech :

Cost of Modi's photoshoot :
20 camera man
2 hours
22 camera
With 1000s of security Would touch around 5 lakhs

Now I understand
You will find whole region around Chennai and Mamallapuram get clean up except this one
May be administration left this one so that Prime Minister Modi could do it and have a good photoshoot.

With Twitter and Instagram on virtually every smartphone in India, Prime Minister Modi is not new to the culture of social media trolling.

Earlier this year in an interview with Bollywood actor Akshay Kumar, Prime Minister Modi appreciated meme-makers in the country for their creativity, intelligence, and humour.