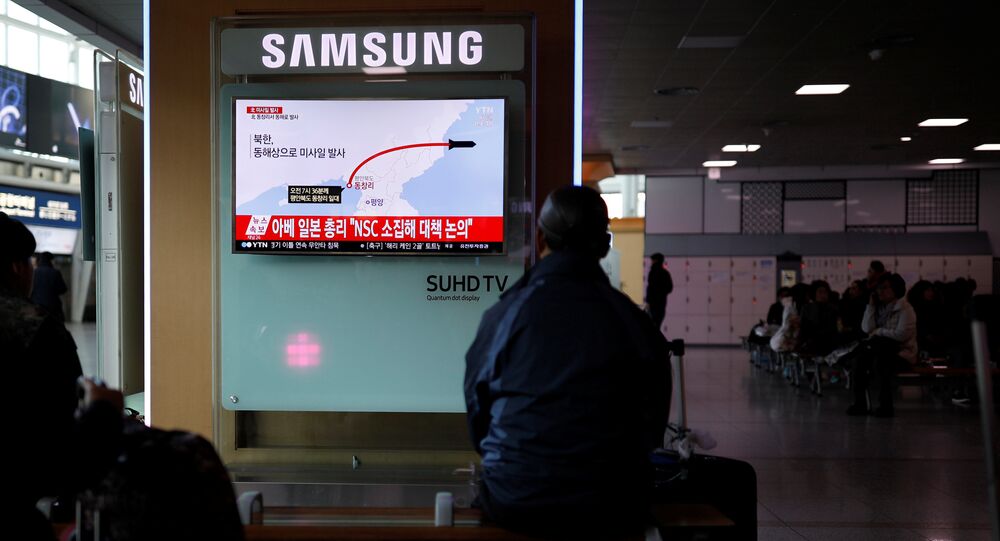 "Our military is monitoring the situation in case of additional launches and maintaining a readiness posture", South Korea’s Joint Chiefs of Staff (JCS) said in a Tuesday release, quoted by the South Korean news agency Yonhap.

According to the statement, an "unidentified projectile" was launched twice, in an eastward direction, from an inland area in North Korea’s South Pyongan Province on Tuesday morning.

South Korea's JCS said, as quoted by The Japan Times on Tuesday that the projectiles were "short-range" and flew about 330 kilometres (205 miles).

The Vladivostok centre of the Russian Tsunami Warning Service said that it had recorded no seismic events in the Sea of Japan following the launches of projectiles.

A senior US administration official noted that the US was aware of the recent launches and is keeping a close watch on the situation.

"We are aware of reports of projectiles launched from North Korea. We are continuing to monitor the situation and consulting closely with our allies in the region".

The launches come just a day after North Korea’s government announced that it was ready to resume talks with the United States in the second half of September.

North Korea has been subject to numerous UN sanctions over the past 10 years for its nuclear and ballistic missile tests. The sanctions aim at reducing the country's ability to develop its nuclear and missile programmes and include a UN Security Council resolution that bans ship-to-ship transfers of refined petroleum products to the nation.

Following the election of US President Donald Trump, the United States has increased its efforts to make North Korea give up its nuclear programme.

Trump said last month that North Korean leader Kim Jong-un had promised that he would stop launching missiles and expressed his desire to meet, once the US-South Korean training exercises were completed.

The situation on the Korean Peninsula significantly improved last year after talks between North Korean leader Kim and South Korean President Moon Jae-in and Trump. In June 2018, Kim and Trump reportedly reached a non-binding verbal agreement stipulating that North Korea would make efforts to promote complete the denuclearisation of the peninsula in exchange for freezing US-South Korean military drills and the potential removal of US sanctions.

The negotiations stalled this year with tensions escalating after Pyongyang’s recent missile tests.