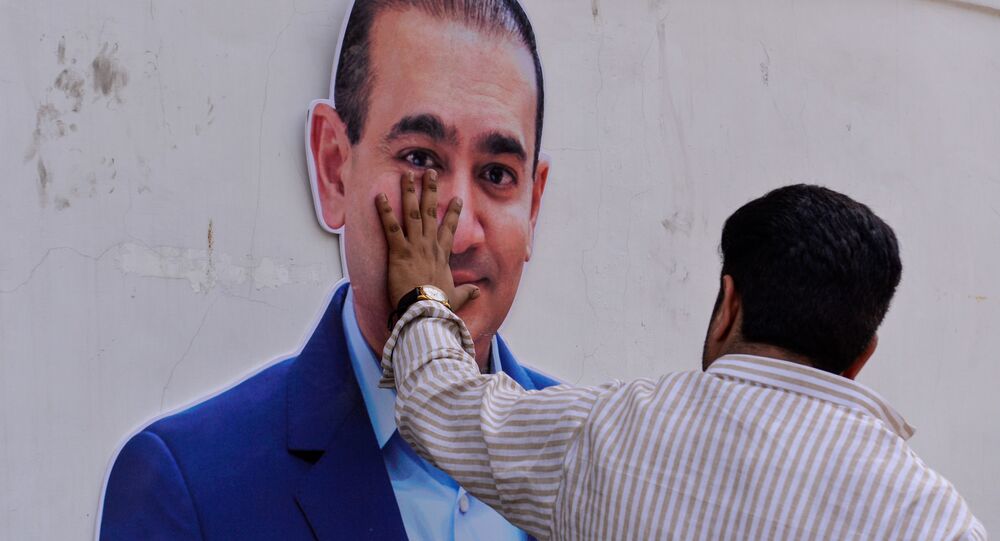 ​New Delhi (Sputnik): Nirav Modi is wanted by Interpol for criminal conspiracy, criminal breach of trust, cheating and dishonesty including the delivery of property, corruption, money laundering, fraud, embezzlement and breach of contract since August 2018. He has been out of India since March of the same year.

With the Government of Switzerland freezing his bank accounts at the behest of India’s Enforcement Directorate (ED), fugitive Indian businessman Nirav Modi appears to be heading for more troublesome times on Thursday.

On Thursday, according to media reports, 48-year-old Modi will appear via video link from prison for a routine remand hearing before the Westminster Magistrates' Court in London.

Accepting an appeal from India’s economic intelligence agency, the ED, responsible for enforcing economic laws and fighting economic crimes in the country, Swiss authorities in the capital Bern froze four accounts belonging to Modi and his sister Purvi. Nirav Modi allegedly transferred nearly $6 million (about Rs.283 crores) from the Indian government-run Punjab National Bank (PNB) to a bank in Switzerland via Dubai and Hong Kong.

While a majority of netizens retweeted the development, there were others who said the Indian government also needed to return the black money stashed away abroad and deposit about $21, 599 (Rs.15 lakh) in each bank account.

#NiravModi after some weeks we will be told that these accounts had no money as they were transferred before the freeze.

Big Win for Modi govt! Switzerland freezes four bank accounts of fugitive Nirav Modi and his sister Purvi Modi with Rs 283 Cr.
Modi Vs Modi game us getting interesting by the day :)pic.twitter.com/hKkJkRWFu5

While we all are still waiting for 15lakhs in our accounts...
#NiravModi has 283 crores in just four of his secret accounts....

Can anyone get that much loot through honest means ? pic.twitter.com/TrQfsBnS43

Swiss authorities have frozen a total of 6 million US dollars present in Nirav Modi's Swiss bank accounts along with the assets. pic.twitter.com/BLZPk1Jrq3

Modi ji, where is the 15 lakh you promised all of us? 💰💸
.
We linked our Aadhar to our bank accounts just for that 😭#NiravModi
.
.
follow me @ind_pol_noob 🌞 pic.twitter.com/LqPY40FLsD

Modi was arrested in March this year by British law enforcement authorities on the Indian government’s request for defrauding the Punjab National Bank of nearly $2 billion. Since then he has been lodged in London’s Wandsworth Prison.

Thursday will be the first time that Modi appears before the UK’s High Court to seek bail for the fourth time since being arrested.

Justice Ingrid Simler of the Royal Courts of Justice in London had in an earlier verdict said there were substantial grounds to believe that Modi could fail to surrender as he did possess the means to abscond.

After considering all material related to the case, she said there was enough evidence to suggest that Modi could interfere with witnesses and destroy vital information.

The High Court judge had said she was proceeding with her decision to order his arrest and incarceration on the basis that the Indian government has acted in good faith in what is undoubtedly “a serious case and a sophisticated international conspiracy to defraud, together with money laundering”.

According to reports, the Crown Prosecution Service (CPS), which is representing the Indian government in the Nirav Modi case in London, has until 11 July to present an opening position statement laying out the prima facie case against the latter.

The next case management hearing is set for 29 July when a timeline for the extradition trial is expected to be laid out.