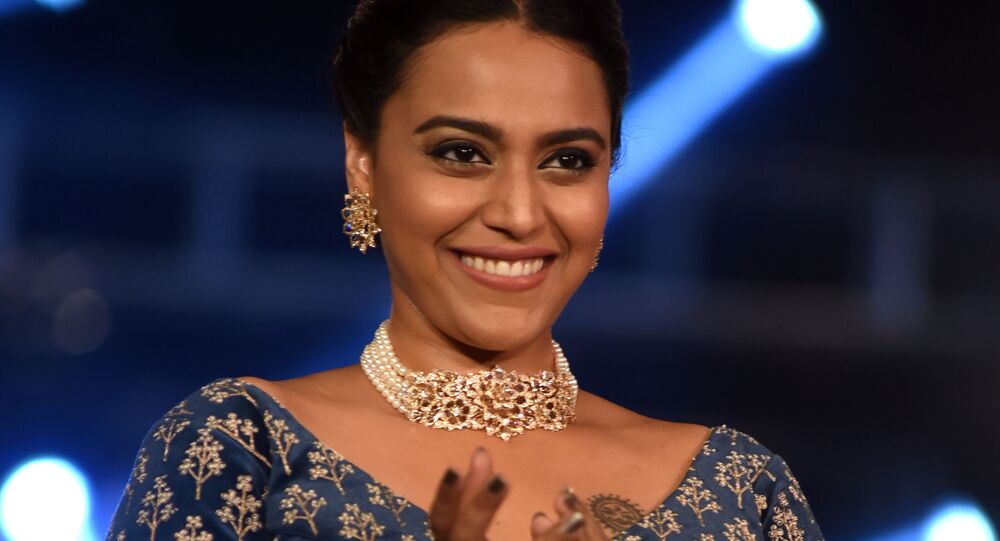 Indian Actress Who Mocked Modi During Election Campaign Gets Trolled

The actress has been a vocal critic of Indian PM Modi and his Bharatiya Janata Party, often accusing them of spreading "communal venom". Her habit of engaging in social media banter with BJP supporters has backfired, inviting a wave of critics and mockery.

New Delhi (Sputnik): A day after Indian Prime Minister Narendra Modi won re-election, his party's critic film Actress Swara Bhaskar, who canvassed enthusiastically for opposition candidates against him and his party, is being vigorously trolled.

The trolling has intensified since the ruling party' National Democratic Alliance registered a landslide victory on Thursday winning 352 of the 542 seats in Parliament.

The award winning Indian actress, who has starred in several hit Bollywood movies like "Veere Di Wedding" and the "Tanu weds Manu" series, has long been vociferously criticising Prime Minister Modi's alleged "right-wing" politics and so decided to canvass for her selected opposition party candidates by showing up at their election rallies.

However, all the candidates that she campaigned for lost in the elections by a sizeable margin of votes.

Instagram / rakhisawant2511
Touchy Subject: Indian Actress Poses With Pakistani Flag, Gets Roasted Online
​Bhaskar, who has a habit of engaging in debates on social media with BJP and Narendra Modi supporters, has been trolled ever since the results for the Indian Parliamentary Elections came out giving a thumping victory to the BJP.

She was mocked for the complete failure of election campaigns supposed to attract votes due to her "star appeal".

1. Kanhaiya Kumar, CPI
He is losing by 4 lakh votes

2. Atishi Marlena, AAP
She is losing by 3 lakh votes

3. Digvijaya Singh, Congress
He is losing by 2 lakh votes

There were some others who used expletives to describe her. Some even went to the extent of calling her a traitor.

All 3 of them are losing big.
New India's New Panauti.

​What is it about politics that brings out the worst in people? I m looking at the comments of people who should be celebrating the victory of the party they support, or at the very least,feeling happy and positive, but no, every tweet is aggressive, rude,taunting or insulting?

​The actress, however, unflinchingly mocked the BJP victory after the election results taking pot-shots at victorious BJP candidate Sadhvi Pragya Singh Thakur, who recently made headlines for calling Mahatma Gandhi's killer a "patriot". Sadhvi Pragya, however, won the election by a huge margin.

Yayyyeeeee for New beginnings #India! First time we are sending a terror accused to Parliament 💃🏾💃🏾💃🏾💃🏾💃🏾💃🏾💃🏾 Woohoooo! How to gloat over #Pakistan now??!??? 🤔🤔🤔🤔 #LokSabhaElectionResults20