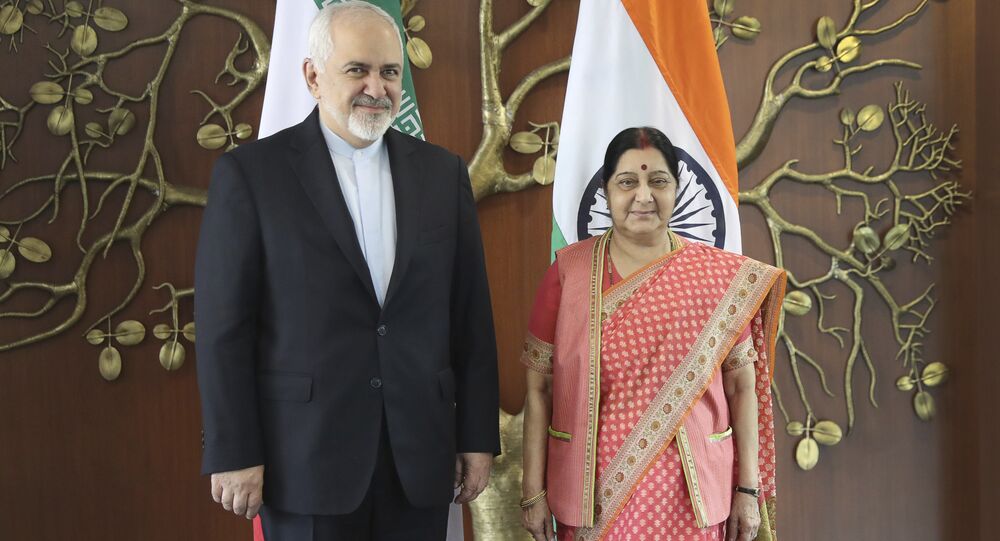 New Delhi and Tehran on Tuesday discussed rising tensions in the Persian Gulf and “a special financial system to augment trade and economic cooperation”.

New Delhi (Sputnik): Taking place for the first time since US sanctions on Iranian crude purchases came into effect on 2 May, the meet held between India's External Affairs Minister Sushma Swaraj and her Iranian counterpart, Javad Zarif, in New Delhi held its own significance.

Indian External Affairs Minister Sushma Swaraj during the meet also conveyed to her Iranian counterpart that a decision regarding the purchase of Iranian crude will only take place after the country's general elections conclude on 23 May.

READ MORE: US Not to Force Private Firms to Sell Cheaper Oil to India Amid Iran Sanctions

​The Iranian Embassy in New Delhi further added that in the constructive meeting, Iran's position on the 2015 Iran nuclear deal, or Joint Comprehensive Plan of Action (JCPOA), steps taken by Iran within the framework of JCPOA, deepening Iran-India ties, and regional developments were discussed.

In a constructive meeting between H.E Zarif and H.E Sushma Swaraj, #Iran's position on #JCPOA, steps taken by Iran within the framework of JCPOA, deepening Iran-India ties and regional developments have been discussed. pic.twitter.com/lzjdEt6zH7

© AFP 2021 / ATTA KENARE
China & India May Demand Discounts to Continue Buying Iranian Oil Amid US Pressure - Researcher
The meeting was held in the backdrop of some media reports saying that New Delhi had stopped purchases of Iranian crude due to US sanctions.

Under its exemption from the US sanctions on Iran, which ended in the beginning of May, India was allowed to buy up to 300,000 barrels per day (bpd) of Iranian oil.

Diplomatic source in New Delhi on Tuesday said the two leaders have bestowed more time to recent developments in the Oman Sea and the Iranian nuclear deal than the crude purchase.

During the meet "India's position on JCPOA was reiterated", the diplomatic source said, adding: "India would like all parties to the agreement should [sic] engage constructively and resolve all issues peacefully and through dialogue".

India also emphasised that commercial considerations, energy security, and economic interests would remain at the core of the decision, the source added.

Iranian Foreign Minister Zarif mentioned that a 60-day timeline has been given to EU-3 (France, Germany, and the UK) for restoring the oil and banking channels.

Zarif's visit to New Delhi was part of Iran's consultation with other countries in the region, including Russia, China, Turkmenistan, and Iraq over the last few days.

Ahead of the meeting, Zarif reportedly said that India was one of the most important "economic, political and regional" partners of Iran. On the issue of Iranian crude exports to India, Zarif said that Tehran and New Delhi have always tried to develop ties in different fields, and to do so, "the two sides have designed a special financial system to augment trade and economic cooperation".

India responded cautiously, saying that it is "adequately prepared" and would continue to work with "partner nations, including with the US, to find all possible ways to protect legitimate energy and economic security interests of India".

Meanwhile, the country's state-owned refiners did not respond to the Saudi offer for additional crude supplies, industry sources told Reuters on Monday.