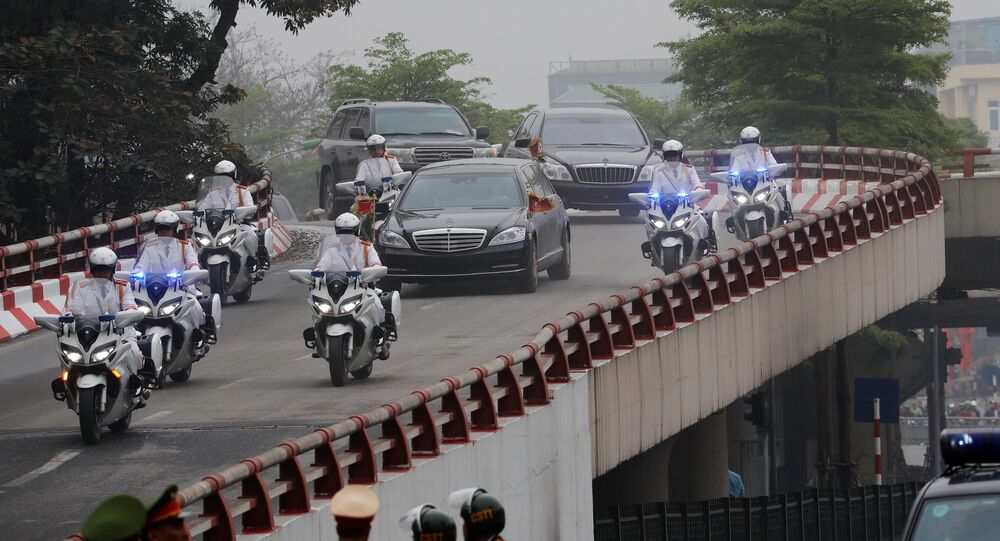 Kim is paying a visit to Vietnam on 1-2 March, shortly after the second US-North Korea summit on denuclearization that concluded in Hanoi on Thursday without any agreements.

Following the bilateral negotiations, Kim praised friendly relations between the two nations, as well as a warm welcome and hospitality on the part of the Vietnamese side, according to the Yonhap news agency.

READ MORE: Trump-Kim Summit a Setback For Leaders, But ‘Big Loss For The People of Korea'

The North Korean leader also expressed gratitude to Vietnam for its assistance in organizing recent Pyongyang's denuclearization talks with the United States.

The Vietnamese president stressed that Kim's visit was a good opportunity for the leaders to exchange views on prospects for further development of bilateral relations, as well as regional and global issues of mutual interest.

© REUTERS / Leah Millis
Analyst on Trump-Kim Summit: They Try to Do Too Much in Too Short Period of Time
Also on Friday, Kim held talks with Vietnamese Prime Minister Nguyen Xuan Phuc and Chairwoman of the National Assembly of Vietnam Nguyen Thi Kim Ngan.

Nguyen Hong Thach, a member of the ruling Communist Party's Commission for External Relations, told Sputnik Wednesday that Hanoi hopes to host other meetings that are of the same magnitude as the recent denuclearization summit between US President Donald Trump and North Korean leader Kim Jong-un.

Nguyen also recalled that the country had previously acted as host for many international high-level multilateral meetings such as the Asia-Pacific Economic Cooperation summit, which Vietnam hosted in 2006 and in 2017.

The second summit between the United States and North Korea abruptly came to an end earlier on Thursday after Trump chose to walk away from the negotiating table following disagreements with Kim on the outline of a deal.

© REUTERS / Leah Millis
Trump Gets Caught in Airport Gaffe After Fruitless Kim Summit (VIDEO)
Trump said afterward that he decided to leave the talks because Kim had demanded full sanctions relief. North Korean and US State Department officials said that Kim had only asked for partial sanctions relief in exchange for dismantling North Korea's main nuclear reactor in Yongbyon.

At the historic Singapore summit, held in June 2018, Trump and Kim pledged to make effort to denuclearize the Korean Peninsula in exchange for security guarantees for North Korea and the suspension of US-South Korean military drills.

Trump and Kim Meet Again, This Time in Vietnam...