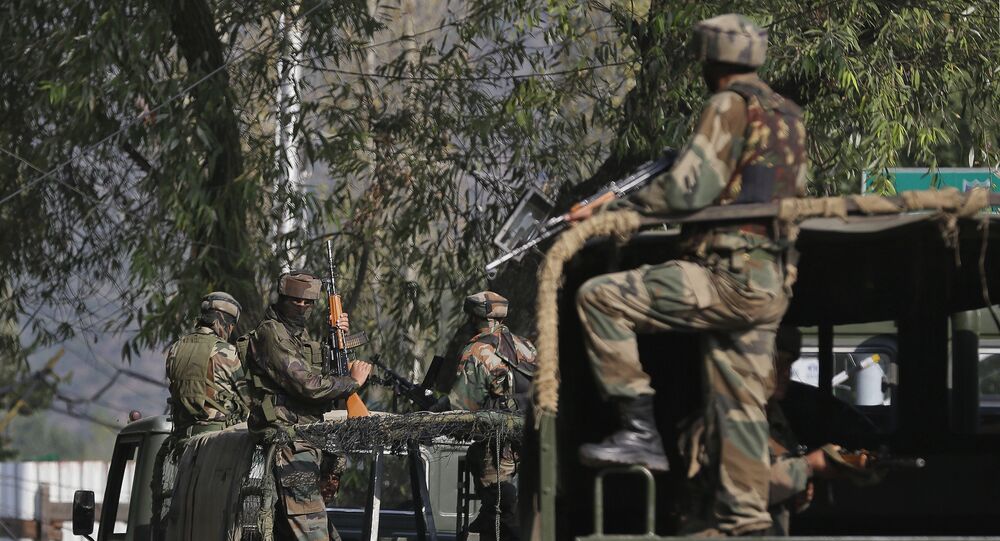 While media reports claim that an Indian airstrike killed more than 300 terrorists in an operation on Pakistani territory, Pakistan has disputed this report. The international community has however called upon the two nuclear-armed neighbours to exercise restraint.

New Delhi (Sputnik) — China, considered a close ally of Pakistan, has called for restraint on the part of both India and Pakistan, urging both to do more to improve bilateral ties in the aftermath of the alleged violation of Pakistani airspace by the Indian Air Force, which the latter claim was an anti-terror operation.

"India and Pakistan are both important countries in South Asia. Sound relations and cooperation serve the interest of both countries for peace and stability in South Asia," Chinese Foreign Ministry Spokesperson Lu Kang said during a press briefing today.

The Chinese spokesperson further added "the two countries can keep restraint and do more to improve bilateral relations."

© REUTERS / Amit Dave
Indian Jets Destroy Terrorist Camp Across Line of Control in Kashmir - Minister
The Chinese foreign ministry has however acknowledged that it was a non-military strike and fighting terrorism is a global practice and needs necessary cooperation. The statement came after a conversation between the Chinese Foreign Minister Wang Yi and Pakistani Foreign Minister Shah Mahmood Qureshi.

The Australian government has also asked India and Pakistan to avoid any action which would endanger peace and security in the region.

"The Australian government urged India and Pakistan to exercise restraint, avoid any action which would endanger peace and security in the region and engage in dialogue to ensure that these issues are resolved peacefully," a  statement from the Australian Ministry for Foreign Affairs read.

Australia also took the opportunity to ask the government of Pakistan to take action against alleged terror groups operating from their territory.

The European Union has asked the two South Asian rivals to avoid further escalation of hostilities.

© AP Photo / Channi Anand
India Threatens to Block Rivers to Pakistan After Attack in Kashmir - Minister
European Union Spokesperson Maja Kocijancic issued a statement on Tuesday saying "We remain in contact with both countries and what we believe is essential is that all exercise maximum restraint and avoid further escalation of tensions."

Reacting to the developments following the strike by the Indian Air Force on alleged bases of the Jaish-e-Mohammad terrorist network in Pakistan, the Foreign Ministry of Iran called upon the two neighbours to resolve disputes and problems peacefully through dialogue.

​Jaish-e-Mohammad earlier claimed responsibility for a suicide bomb attack on 14 February that killed 45 Indian paramilitary police in Pulwama of Kashmir.