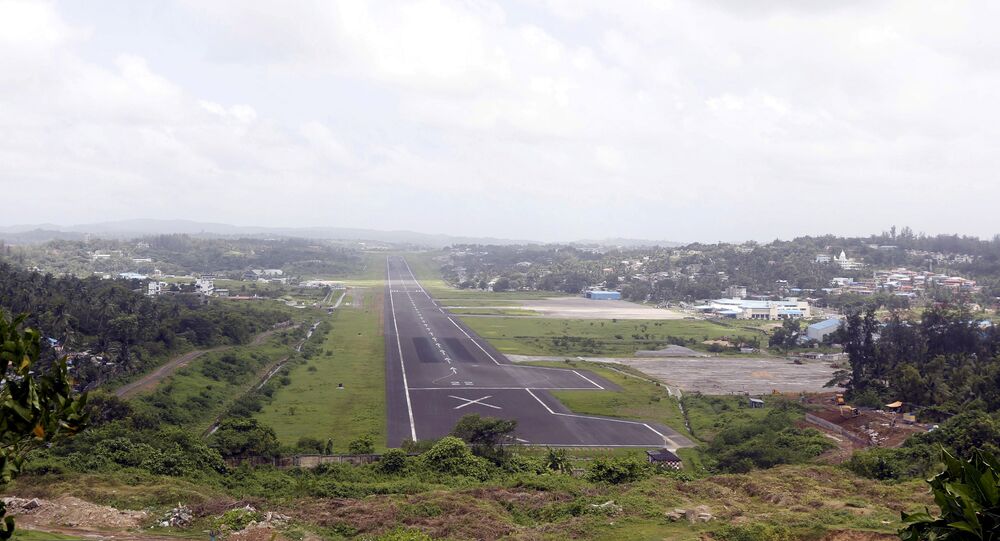 INS Kohassa is the third naval air base in Andaman after INS Utkrosh at Port Blair and INS Baaz at Campbell Bay. The three airbases together will be of vital strategic advantage to the Indian Navy as they lie close to the Malacca Straits – the world’s busiest shipping route, fulfilling two-third of China’s energy requirements.

New Delhi (Sputnik): In a strategic move to enhance its surveillance capabilities against Chinese warships and submarines entering the Indian Ocean Region (IOR) through the nearby Malacca Straits, the Indian Navy has operationalised a new naval base located at the northern-most tip of the archipelago that forms the Andaman and Nicobar territory of the Indian Union.

The naval air base that will initially be used to operate the Dornier, Mi-8, and Chetak aircraft would be able to host larger aircraft once it is fully expanded to 100 hectares.

"Present runway length is 1,000 meters, where only a few defence aircraft can land. As India's Environment and Forest Department has already approved the acquisition of forest land of 100 hectares north of the strip, the runway length will be extended to 3,000 meters for the operation of wide-bodied defence and civil flights", a military official told Sputnik.

The extension work of the airbase has been ongoing for the last one year. The airbase will not only consolidate the security and surveillance over the islands, but will also assist in the rapid development of civil infrastructure which will immensely benefit the local population.

"Located in the northernmost part of the islands, the airfield holds strategic importance not only for the security of the islands but also for its overall development. With the addition of this airfield, the Andaman and Nicobar Command's (ANC) ability to operate independently from all the regions of the Andaman and Nicobar Islands will get a great boost", an Indian Navy statement reads.

"Not only do they provide India with a commanding presence in the Bay of Bengal, but the Islands also serve as our window into East and South East Asia. India has progressively developed Port Blair as home to amphibious platforms, naval offshore patrol vessels and fast attack craft. One of the primary functions of INS Baaz is to provide information, based on 'airborne maritime surveillance'", Admiral Nirmal Verma, India's former chief of the naval staff, said about INS Baaz.

Earlier this month, Indian Navy Chief Admiral Lanba observed that since 2008, at any given time, there are six to eight Chinese Navy ships in the northern part of the Indian Ocean, indicating the growing outreach of Chinese military in the region.

"Also, two years ago they commissioned their first overseas facility or base in Djibouti. The stated aim of this deployment is to protect their trade which is flowing through this area, from piracy. They have deployed submarines for anti-piracy operations which are the most unlikely platform to be used for this role", Admiral Lanba had said.