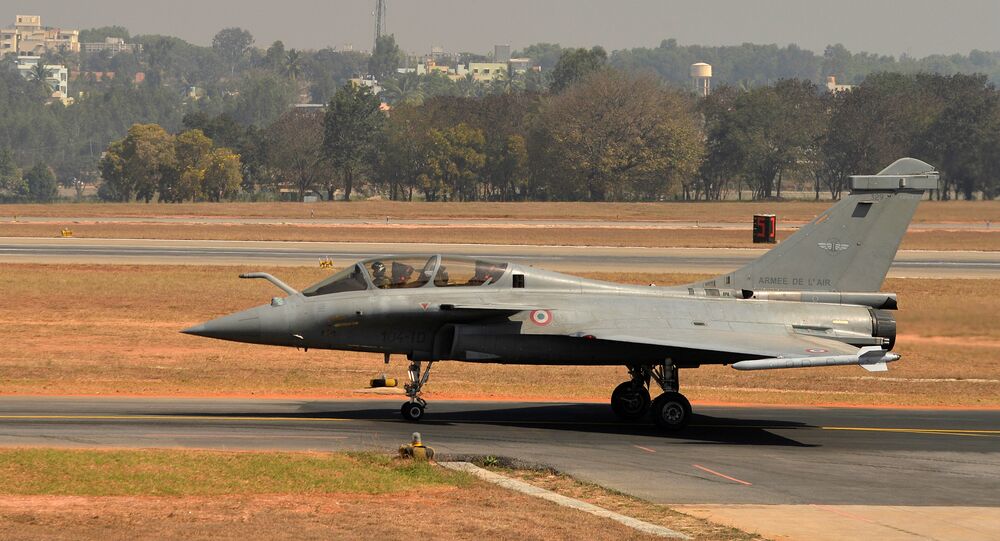 The deal between India and France to purchase Rafale fighter jets is proving to be the proverbial albatross around Prime Minister Modi’s neck as new facts emerge, putting him under further scrutiny.

New Delhi (Sputnik) — The Indian opposition has stepped up its demand for a Joint Parliamentary Committee (JPC) probe into the Rafale deal amid reports that Prime Minister Modi's decision to buy 36 aircraft instead of the 126 asked for by the Indian Air Force (IAF) pushed the price of each jet up by 41.42 per cent.

India signed a contract with Dassault Aviation to buy 36 Rafale warplanes for 7.87 billion euro in 2016.

According to a report in the The Hindu newspaper, the prime minister's acceptance of the 1.3 billion euro cost for the design and development of 13 India-specific enhancements to be spread over a mere 36 jets instead of the original 126 was the key reason for the per unit price hike.

"Prime Minister Narendra Modi's decision, announced out of the blue in Paris on 10 April 2015, to buy 36 Rafale fighter jets from France instead of the 126 asked for by the Indian Air Force for six squadrons pushed the price of each fully fitted, combat-ready aircraft up by 41.42 percent. It was the National Democratic Alliance government's acceptance of the cost of 1.3 billion Euro claimed for the design and development of 13 India Specific Enhancements and the distribution of this non-recurring cost over 36 instead of 126 bare-bones aircraft, that became the major reason for the big increase in price," says the report.

© AP Photo / Remy de la Mauviniere
France Denies Buying Rafale Fighter Jets at a Price Cheaper Than India
The report, published by veteran journalist N Ram, whose reports earlier had formed the basis of the erstwhile Bofors exposé that had brought down former prime minister Rajiv Gandhi's government, looks into how procedures and objections were bypassed. The report focuses on how and why the price of the F3-R standard Rafale fighter jets, with practically the same configuration and capabilities, changed substantially at three different times, namely in 2007, 2011 and 2016.

The report says that in the 2007 bid by Dassault, the design and development cost of 1.4 billion euro was to be spread over 126 aircraft that were negotiated by the for United Progressive Alliance (UPA) government in 2007.

Although this fixed cost was negotiated down to 1.3 billion euro in the 2016 inter-governmental deal, it was distributed over 36 fighter jets. This straightway meant an increase of 25 million euro in the price of each aircraft when compared to the original deal, which assumed the design and development costs would be spread over 126 aircraft, The Hindu reported. Modi's government had also negotiated a 9 per cent discount on the 2011 Dassault bid price for bare-bones aircraft.

Ram reported that the increase of 25 million euro was far greater than the 9 per cent reduction in the price of a bare-bones aircraft offered by France in 2016. The nine percent discount on the 2011 Dassault bid applied to the price of a bare-bones and not fully fitted and combat-ready aircraft,  as confirmed by Dassault Aviation Chairman and CEO Eric Trappier in a November 2018 interview.

Congress leader and former finance minister P Chidambaram alleged that the NDA government has wronged the country by reducing the number of aircraft in the deal as it denied the Indian Air Force the fighter jets it desperately needs. Moreover, it gave a windfall to Dassault Aviation by paying a higher price.

CPI General Secretary Sitaram Yechury alleged that the Rafale deal was done in a great hurry by Modi so that an individual businessman could benefit.

No doubt that the deal for 36 Rafale fighter jets with France was done in a great hurry by Modi for the benefit of his crony businessman, at the cost of India's national security and at a heavy cost to the Indian exchequer. It is crystal clear now, and no amount of spin will help https://t.co/jKP8Gk613N

"We demand JPC to examine the Rafale scam," Yechury tweeted.