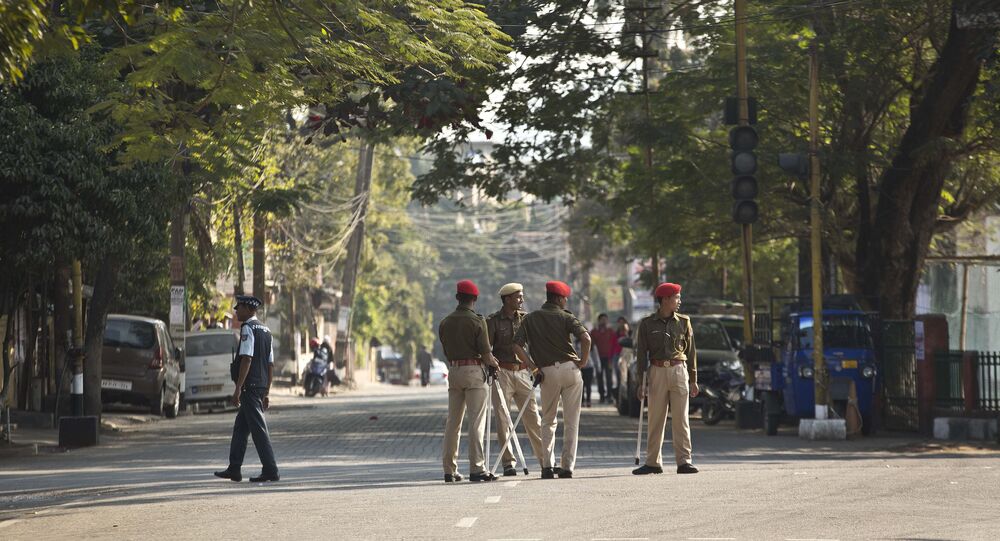 Indigenous people from the state of Assam feel that immigrants who are already eating into their limited resources and rights will benefit further once they are legitimized by citizenship.

New Delhi (Sputnik): India has moved the Citizenship Amendment Bill for parliamentary approval on Tuesday amid massive violent protests in the north-eastern parts of the country. The bill, if passed by both houses of the parliament, will grant citizenship to six identified minority communities namely, Hindus, Sikhs, Jains, Buddhists, Christians and Parsis from Afghanistan, Pakistan and Bangladesh who came to India before 31 December 2014.

Opponents of the bill have burned effigies of government ministers, vandalised offices of the ruling Bharatiya Janata Party, torched vehicles and held naked marches on the streets against the bill.

Members of the Tai Ahom Yuva Parishad cut their own skins with blades and wrote slogans on the road tarmac on the streets of Lakhimpur against the bill amid the 11-hour lock-down called by the Northeast Students' Organisation (NESO), All Assam Students' Union (AASU) and another 30 indigenous organisations.

Police and security forces deployed in Dibrugarh had to fire gunshots in the air to disperse a mob that went unruly and torched BJP offices. The indigenous people have been opposing the bill as they feel that granting citizenship status to immigrants will erode their limited opportunities in terms of employment and other social benefits. They contend that the bill also contradicts the 1985 Assam Accord, which states that illegal immigrants coming from Bangladesh after 25 March 1971 would be deported.

"If the proposed Citizenship (Amendment) Bill comes into effect, we will have to accept another two million people who have been identified as foreigners in the National Register of Citizens. This means again we have to accept a huge burden. If the government passes the Bill, more Bangladeshis will come in near future", Anup Chetia, founder leader of United Liberation Front of Asom (ULFA), told Sputnik in an exclusive interview.

Opposition parties have also shouted slogans inside and outside the parliament against the bill which they termed "unconstitutional and going against the secular principles of India".

Here is another video of innovative protest by @AITCofficial MPs to withdraw Citizenship Amendment Bill and protect Indian citizens, near the statue of Mahatma Gandhi inside #Parliament

"If the bill is passed, Assam will burn. The bill will burn not just Assam but the whole of Northeast India. There is a divisive nature to this bill and the draft committee has shot down all suggested amendments", Professor Sougata Roy, a member of parliament from Trinamool Congress, said during the protest.

Defending the bill, India's Minister of Home Affairs Rajnath Singh clarified that the Act is not confined to the state of Assam. The bill will apply to all states and Union Territories of the country.

"The beneficiaries of Citizenship Amendment Bill can reside in any state of the country. The burden of these persecuted migrants will be shared by the whole country. Assam alone would not have to bear the entire burden and Government of India is committed to give all help needed to the state government and people of Assam", Rajnath Singh said.

Rajnath Singh highlighted the discrimination and religious persecution faced by the minorities in these countries. "They have no place to go to, except India", he added.

"Migrants from these communities were earlier given protection against legal action up to the year 2016. Long term visa provisions were made for them. The proposed amendment will make these persecuted migrants eligible to apply for citizenship", Rajnath Singh said.