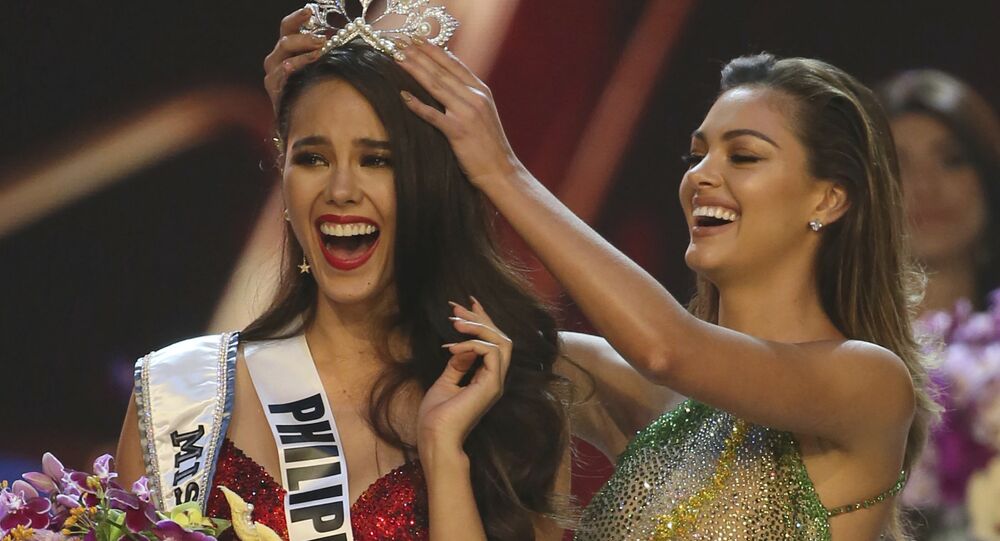 Catriona Gray of the Philippines won the 2018 Miss Universe beauty pageant. However, instead of universal national cheer, her victory has sparked a surprising amount of backlash at home. Why were Filipinos so disappointed with their own victory?

For some, apparently, Gray, who is of mixed Scottish and Filipino descent, does not look Filipino enough.

"This Miss Philippines looks to me like a beautiful Caucasian with a pleasant tan," tweeted Friar Stephanos Pedrano. "These international beauty contests merely promote and perpetuate Caucasian features as the ‘gold standard' of beauty."

© REUTERS / Erik De Castro
Symbol of Philippines' Fight With US Colonialism Returns Home
Why does that matter, one may ask? After all, Miss Ireland does not sport ginger hair.

Well, according to South China Morning Post, there is a deeper underlying social issue that goes far beyond simple facial features.

For 330 years, the Philippines was a Spanish colony, notes Francesca Ayala, a Hong Kong-based content strategist who grew up in Manila. The nation was later occupied by the US, gaining independence only in 1946.

​White people dominated the Asian nation for centuries and being white — or Caucasian, as some put it — automatically meant you belonged to the upper class of society.

"The perception of having lighter skin means you come from a wealthier background, a more luxurious lifestyle," Ayala explains. "That mentality doesn't go away overnight."

"Class is connected with skin colour," Twitter user Kuyachris adds. "You're looked down upon if you're of darker complexion."

© Sputnik / Evgeny Odinokov
Philippines Ditches Russian Helicopter Deal Amid Fears of US Sanctions
According to Kuyachris, many cosmetics vendors in Manila advertise skin-whitening products, promising their buyers "the skin of the rich." Darker skin in the Philippines is still widely associated with manual labor and low class.

Gray's victory is not the first such controversy for the Miss Universe Pageant: in 2000, Miss Universe winner Laura Dutta of India sparked a similar backlash over her perceived Eurasian features. Dutta is of mixed Punjabi and British heritage.

For some, this is an issue worth fighting for. Michael Hunt, a visual sociologist from South Korea, berates the global obsession with "whiteness" and calls for a fight against the dominance of European beauty standards, if not expressing exactly how.

"Whiteness is preferred in the world. We know that's problematic but what are we going to do about it? How do we fight something that is so profuse?" he questioned. "People are angry that beauty standards are out of whack; beauty pageants literally pin numbers on people who look the best. Clearly, contestants are going to look a certain way and are going to reflect dominant beauty standards."