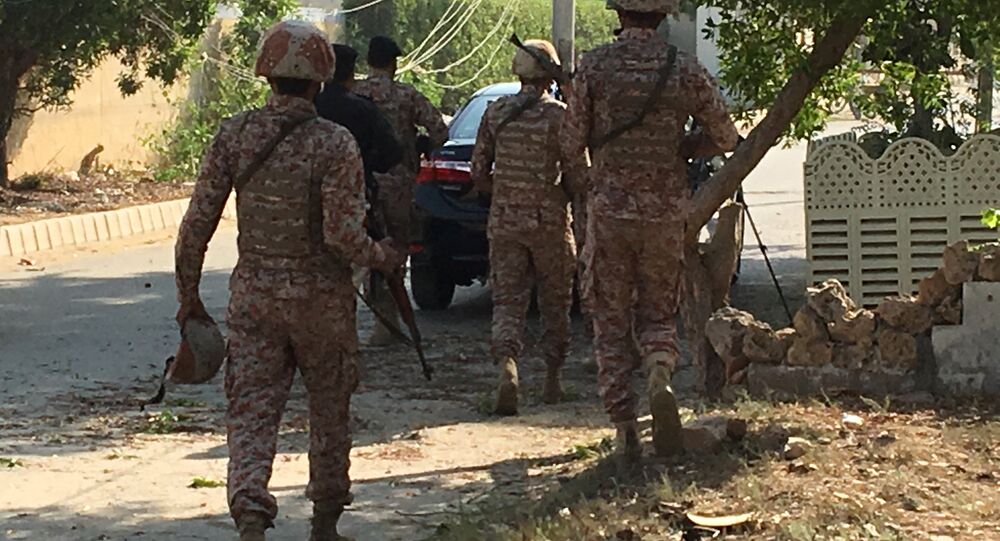 Pakistan's insurgent group Balochistan has reportedly claimed responsibility for the attack in the Clifton area of the city. Imran Khan has called the attack a "conspiracy" against China-Pakistan strategic ties.

According to local media reports, citing local eyewitnesses and police, a blast and several shots were heard near the Chinese diplomatic mission in the Pakistani city of Karachi.

From three to four men tried to enter the consulate and opened fire on the guard standing outside the building. The security guards, however, have managed to foil the attack, Dunyanews reported.

As seen in footages on social media, a thick plume of smoke has been emerging from the mission's premises following a loud blast.

Karachi terror attack. Seemingly an attempt to enter and capture a building, Chinese consulate or another set-up. More info to follow pic.twitter.com/w04fkOfOzX

Local TV reported, citing police, that two policemen have been killed in the attack, while unconfirmed reports suggest that there are wounded. According to Reuters, citing medics, one guard has been injured in the incident.

At least two people, who visited the Chinese consulate in Karachi to apply for visa, were killed in the blast, local media reported, citing sources.

"A man and his son who were visiting the embassy to apply for Chinese visas were killed in the attack," sources said, as quoted by Geo TV broadcaster.

Heavy exchange of firing b/w armed men& security forces smoke coming out in what seems like a terror attack in the surroundings of Chinese Consulate, yards away from my seaview apartment, Clifton, Karachi. pic.twitter.com/zZOREpy8Fj

A Karachi police chief has stated that law enforcement officers had eliminated three suicide bombers, adding that the attackers hadn't managed to enter the building.

Pakistan's insurgent group Balochistan has reportedly claimed responsibility for the attack. When commenting on the deadly attack, Pakistan's Prime Minister Imran Khan said it was a "conspiracy" against China-Pakistan strategic cooperation and ordered an inquiry into it.

The Chinese Foreign Ministry has commented on the attack, saying that all consular staff and their families were safe following the shooting.

"China strongly condemns any violent attacks against diplomatic agencies and requests that Pakistan takes practical measures to ensure the safety of Chinese citizens and institutions in the country," Geng said at a regular press briefing.

3/4 attackers said to be involved in the attack are believed to have arrived at Chinese Consulate on a motorbike laden with explosives (hand grenades). #Karachi

According to a local journalist, several Consulates are located near the Chinese consulate in Karachi, including the Kuwaiti and Russian diplomatic mission. No further details have been immediately available.