The protracted political crisis in Sri Lanka has escalated over the past few days, after legislators allied with Prime Minister Mahinda Rajapaksa clashed with opposing MPs and police in the parliament building in the island nation's capital Colombo.

During the fight, Rajapaksa supporters hurled chairs and books at police officers and allegedly threw chilli powder at opposing MPs, which led to at least one politician and several policemen injured.

Dramatic video from Srilanka Parliament. Fist-fight, punches, slaps between MPs after difference of opinion over voice vote on the no confidence motion. Former President @PresRajapaksa also seen seated as blows erupt near the Speaker’s chair. pic.twitter.com/B4cMsltOQM

MP Palitha Thewarapperuma of the United National party was reportedly seen wielding a knife as the brawl occurred, something that was followed by Rajapaksa supporters surrounding the Speaker's ceremonial chair and shouting protests over the use of knives in the fight.

More than twenty police officers tried to tackle the melee as Rajapaksa watched from his chair as MPs attacked the police.

After Speaker Karu Jayasuriya, who took cover on a side bench and was surrounded by officers, called for a voice vote on the no-confidence motion in Rajapaksa, a roar was heard across the chamber, followed by Jayasuriya declaring the vote had carried by a majority.

The scuffle came after the parliament reconvened on Wednesday and lawmakers tried to approve a motion of no-confidence in what they described as Rajapaksa's "purported" cabinet, also passing motions to declare Sirisena's decisions illegal.

"We shall agitate for elections. The country is in anarchy. The parliament is in anarchy," they were quoted by The Guardian as saying.

On October 26, Sri Lankan President Maithripala Sirisena suspended parliament until November 16, just a day after removing Ranil Wickremesinghe as Prime Minister and replacing him with opposition leader Mahinda Rajapaksa, who previously served the sixth president of Sri Lanka, from 2005 to 2016.

Wickremesinghe was quick to oppose the move, claiming that "the person who has the majority support in parliament has to be the prime minister, and I have that majority of support."

Sri Lankan Media and Finance Minister Mangala Samaraweera, in turn, referred to Rajapaksa's appointment as "an anti-democratic coup," while a European Union delegation confirmed that it is closely monitoring the situation in the island nation of some 23 million. 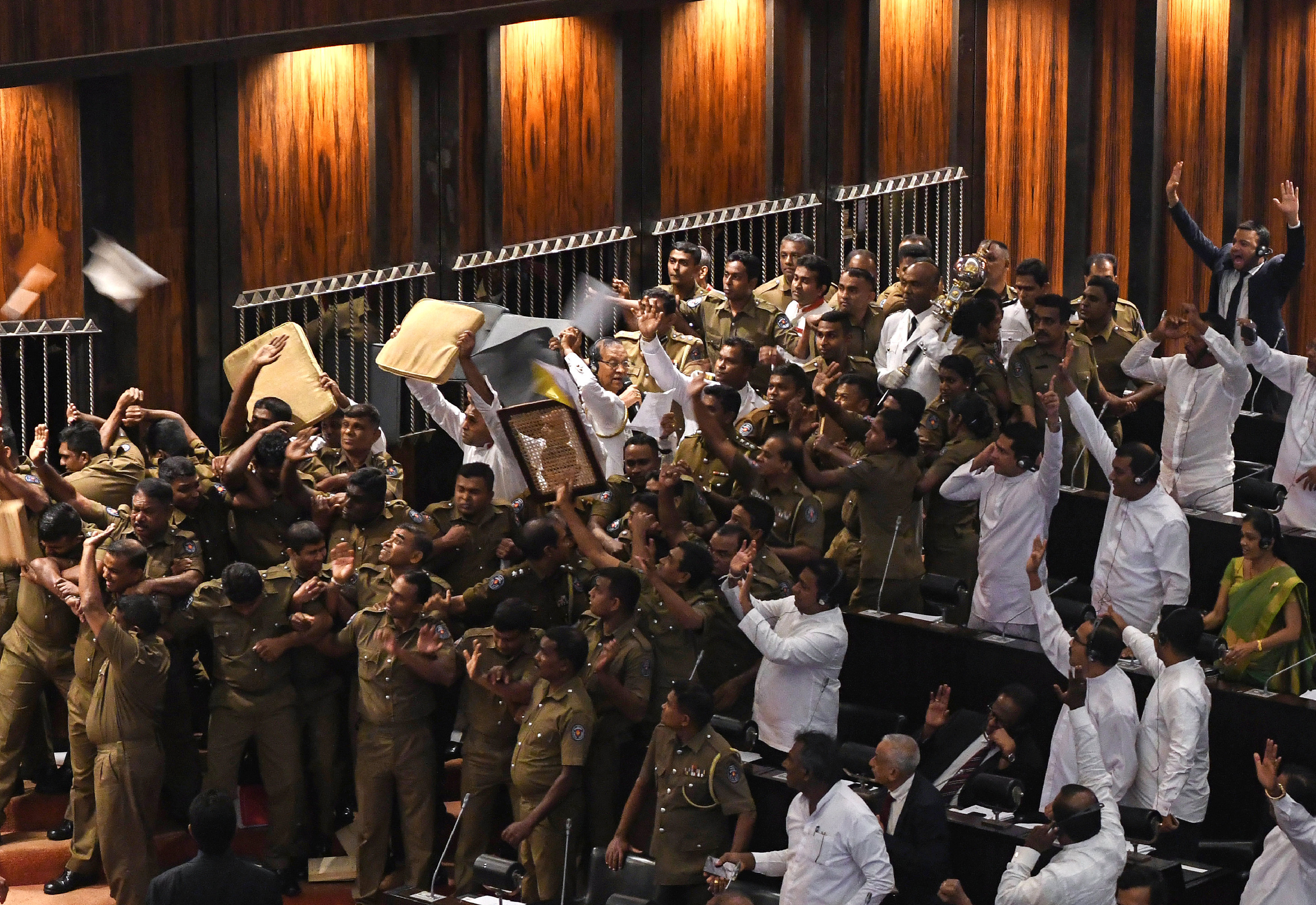 © AFP 2019 / LAKRUWAN WANNIARACHCHI
Sri Lankan police escort parliament speaker Karu Jayasuriya (C holding microphone) as aides hold up cushions to protect him and themselves from projectiles thrown by rival legislators in the assembly hall in Colombo on November 16, 2018

The delegation urged all parties to the conflict "to fully act in accordance with Sri Lanka's Constitution, to refrain from violence, to follow due institutional process, and to respect the independence of institutions, and freedom of media."

Sirisena also accused India's intelligence services of being involved in the assassination plot, although the allegations were rejected by the intelligence members.