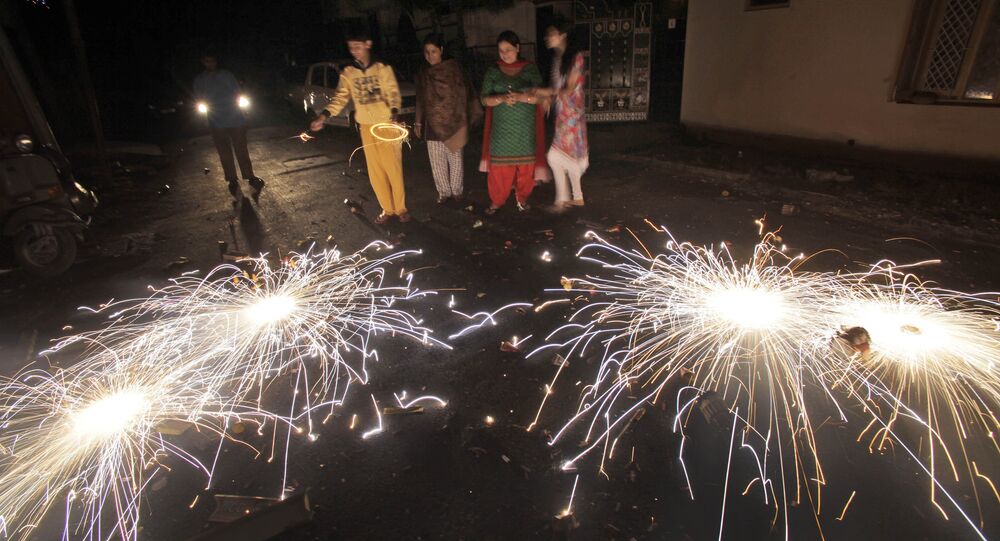 A total of 301152 diyas (earthen oil lamps) were lit up simultaneously for five minutes at the banks of Saryu river in India’s Ayodhya breaking the earlier Guinness Book of World Records. The mega event was witnessed by visiting First Lady of South Korea Kim Jung-sook.

The north Indian city of Ayodhya has broken a world record by lighting over 300,000 lamps on the occasion of Diwali on Wednesday.

Diwali, spelled as Deepawali in some places, is the famous ‘festival of lights' celebrated to commemorate the legendary homecoming of Lord Rama to his kingdom of Ayodhya after seven years in exile, as inscribed in the mythological epic Ramayana.

According to Hindu mythology, after defeating the demon king Ravana, King Rama was welcomed by the people of Ayodhya by lighting lamps in front of their homes and on streets.

I am fortunate to capture this in my eyes & heart. 3 Lacs Diyas lit in Ayodhya. Getting goosebumps 🙏 pic.twitter.com/V8e06tSe0W

© REUTERS / Yonhap
Mega Diwali Event in India to Shine Light on Ancient Linkage With South Korea
The world record endeavor was led by Yogi Adityanath, the Chief Minister of the state of Uttar Pradesh to which Ayodhya belongs. In the attempt, participants lighted earthen lamps on the banks of the Sarayu in the largest display of oil lamps ever.

​"301,152 lamps were lit simultaneously for five minutes on the banks of the Sarayu River, which runs through the holy city of Ayodhya in Uttar Pradesh, beating a 2016 record held in Haryana," a release by the local authority read.

The event in Ayodhya was attended by South Korean first lady Kim Jung-sook. Kim began her tour by offering tribute at the Queen Heo Memorial and attending a ground-breaking ceremony for the upgrade and beautification of the memorial. Many South Koreans trace their linkages to Queen Heo who was an Indian princess before marrying the King of South Korea in AD 48. An international ‘Sister City' agreement was signed between India and South Korea in 2001 to strengthen this linkage.