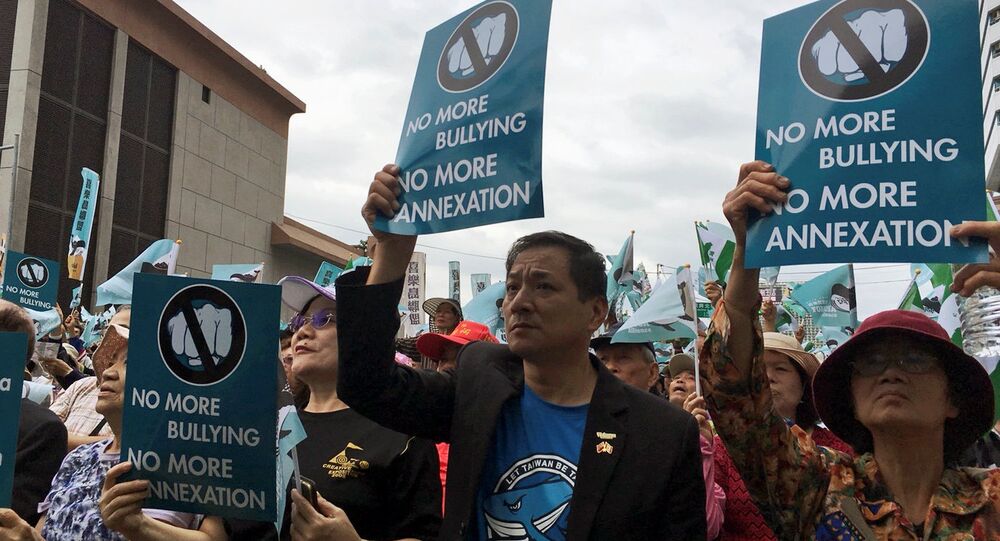 On Saturday, thousands of protesters gathered in Taipei, the capital of Taiwan, demanding that President Tsai Ing-wen set up a referendum to decide whether the people prefer to declare formal independence from mainland China.

The protest is the first large-scale call for sovereignty since Taiwan declared its independence over 20 years ago. China considers the self-governing island of Taiwan part of its territory and has claimed sovereignty over it. Taiwan, by comparison, still formally bears the name of the pre-communist-era government, the Republic of China, whose territorial control was confined to the island at the conclusion of the civil war in 1949, when the People's Republic of China was established in Beijing on the mainland.

During the Saturday protest, organized by the New Formosa Alliance (supported by two pro-independence former Taiwan president, Lee Teng-hui and Chen Shui-bian), protesters were only allowed to convene in an area outside the headquarters of the Democratic Progressive Party (DDP) on Beiping East Road, the South China Morning Post (SCMP) reported Monday.

Although organizers said that 120,000 participated in the protest Saturday, police claim that no more than 5,000 people took part. Protesters shouted slogans including "Taiwan is Taiwan" and "We are an independent country," while waving flags and placards with the phrases, "Say no to China, say yes to Taiwan" and "No more bullying, no annexation."

"Every Taiwanese should get to choose Taiwan's future. It should be a decision by the 23.57 million Taiwanese people, not by China or Xi Jinping," independence activist Kuo Pei-horng, head of the alliance, told the Straits Times on Thursday, ahead of the protests.

"The protest is to tell the world that Taiwanese people can no longer tolerate China or any foreign regime trying to invade our land. Taiwanese people want an independent country and to be their own masters," he added, cited by SCMP.

Since taking office in 2016, Tsai has promised to maintain current relations between Taipei and Beijing, causing many pro-independence supporters to criticize her DPP party for not upholding its pro-independence platform.

Despite dour and periodic warnings from Beijing, the US Senate Armed Services Committee passed an annual defense policy bill for 2019 that includes provisions to strengthen military cooperation between Washington and Taipei through joint drills and weapons sales and by increasing the US military presence in the East China Sea.

Since taking office, US President Donald Trump has approved the sale of at least $1.4 billion worth of weapons to Taipei. In March, Trump signed new rules allowing senior US officials to travel to Taiwan to meet their governmental counterparts, and vice versa.

Earlier this month, Taiwan bought 18 advanced targeting pods for its F-16 aircraft as part of its deal with the US to purchase around $330 million worth of defense equipment.

Beijing has demanded that the US cancel its weapon sales to Taiwan.

The new arms sale is occurring concurrently with an ongoing trade war between the US and China, which escalated in June when Trump slapped a 25 percent tariff on $50 billion worth of Chinese goods, with Beijing responding in kind.

Trump accused China of "unfair trade," including alleged state-led efforts to steal US technology and intellectual property, as well as "discriminatory technology licensing practices." In September, Trump issued new tariffs on $200 billion in Chinese goods, prompting a tariff hike on $60 billion of American products from Beijing.