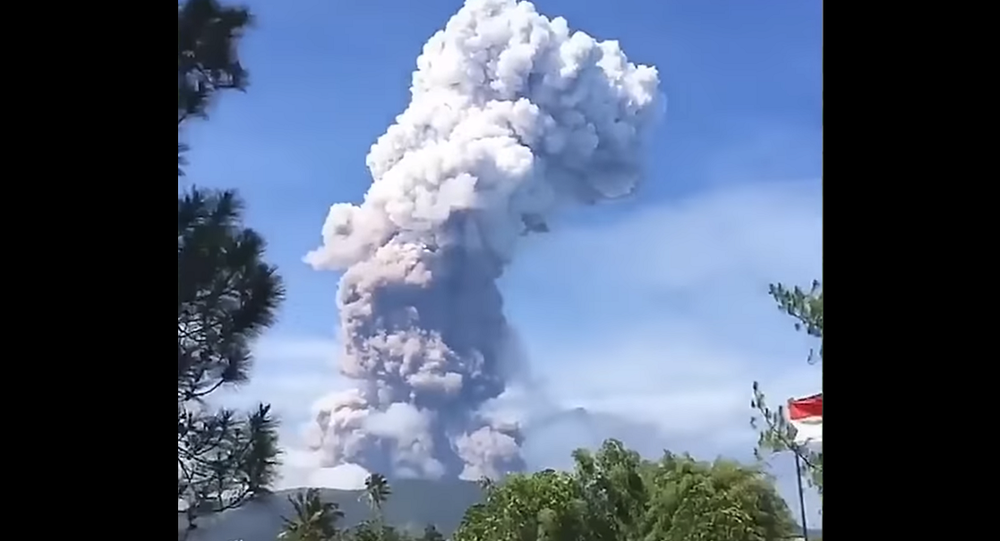 Only days after experiencing a devastating earthquake and tsunami that killed thousands, Indonesia’s Sulawesi saw one of its nine volcanoes erupt Wednesday, launching plumes of ash into the sky and lava flows down its sides - all this while everyday eruptions continue as usual.

Mount Soputan sits among a cluster of volcanoes on Sulawesi's northern coast and is one of nine on the island. Indonesian authorities were prompted Wednesday to issue alerts in the surrounding area as well as to air traffic when the 5,800 foot-high crag cone began billowing a plume of smoke and ash over 2.5 miles into the sky and lava began pouring down the side.

Authorities issued warnings to air traffic about the dangers of the ash cloud and raised alert levels near the volcano to "standby status level III," signaling that residents within 4 km of the volcano should have their gas masks ready, the Telegraph reported. No evacuation has yet been ordered.

​Scientists have not yet determined whether the eruption was directly triggered by the earthquake in central Sulawesi on Friday. However, Indonesian news site Tempo reported that a government volcanologist suspected the eruption was linked to a disastrous 7.5 magnitude earthquake that struck the west and central areas of the island on Friday.

Friday's quake collapsed buildings and tore up roads across the island, but even more catastrophic was the tsunami that struck the major city of Palu, home to 350,000 people.

The wall of water arrived shortly after the tsunami warning was mistakenly cancelled, sweeping away homes and buildings and dragging people out to sea, killing at least 1,340. With power out, communication and transportation blocked and debris everywhere, Indonesian authorities are struggling to get food, water and medicine to survivors.

A second volcano erupted in Indonesia Wednesday as well, the Son of Krakatoa, on the other side of the country near the island of Java. Son of Krakatoa erupts almost daily, and officials indicated the only danger posed by the smoke and lava flow extended only 2 km out from the volcano's cone.