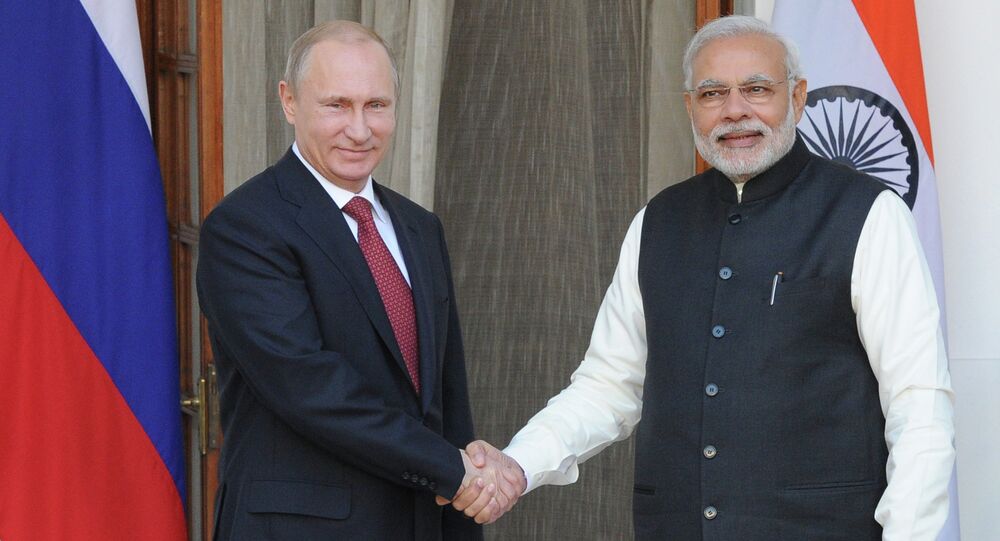 The 19th India-Russia bilateral annual summit beginning on October 5 in New Delhi is likely to witness the signing of crucial energy deals by the two sides. As a consequence, the share of Indian firms in Russia's oil and gas sector will see a significant increase.

Industry sources told Sputnik that India's state-owned ONGC Videsh Limited (OVL) may sign a pact with Gazprom during the summit.

"ONGC Videsh is taking its investment in Russia to another level. We expect a joint development project with Russian Gazprom on the shelf of the Pechora and Okhotsk seas in Russia," an industry source told Sputnik.

© Sputnik / Vitaliy Ankov
India, Russia Enhance Bilateral Investment Target to $50 Billion
OVL already has stakes in three operational projects in Russia that amounted to 56% of OVL's total overseas production in the financial year ending March 2018. OVL has 41 projects globally with a strong exploration and production presence across 20 countries outside India.

Meanwhile, some other Indian state-owned firms have exhibited interest in purchasing equity in the Yamal LNG project and have identified some other areas for joint development.

On September 13 of this year, India's oil minister Dharmendra Pradhan had said that the country's energy companies were looking to invest in more oil and gas projects in Russia.

"Russian supplies will help us in meeting the objectives of price stability and energy security. Our oil and gas PSUs (public sector undertakings) are continuing to explore their participation in more oil and gas projects in Russia," India's oil minister had said while addressing an event in New Delhi on September 13.

Last year, a consortium led by Indian Oil bought a 23.9 percent stake in Vankorneft, a subsidiary of Rosneft, as well as a 29.9 percent interest in Taas-Yuryakh Neftegazodobycha. In total, including older investments in Sakhalin, Indian investment in Russia's oil and gas sector has exceeded the $10 billion level. In addition, a Russian-led consortium has committed an investment of $13 billion in India's Essar Oil.