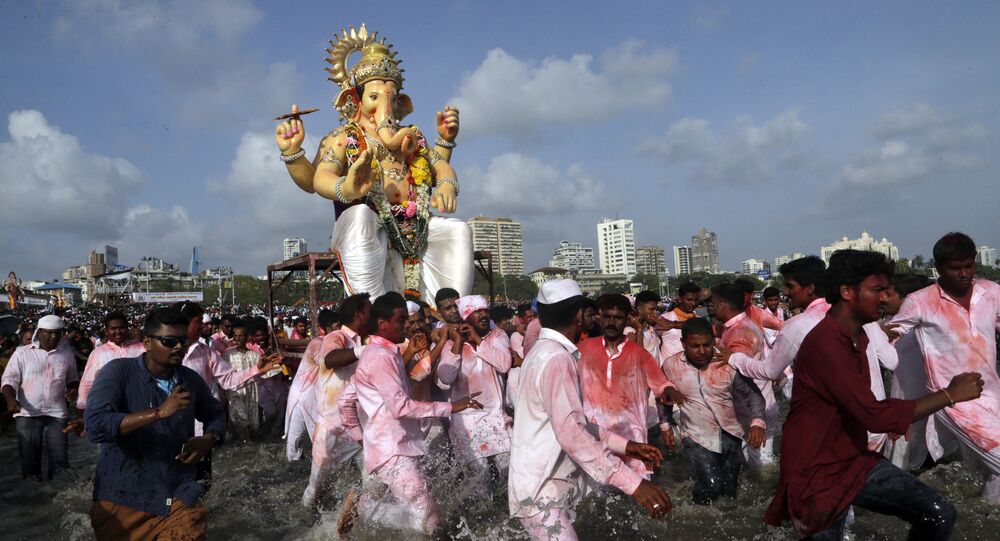 In yet another campaign that has won the hearts of many, traffic police in India’s IT hub Bengaluru dressed up as a Hindu god, distributing helmets to riders to drive home the message that not protecting one’s head could be fatal.

New Delhi (Sputnik): India, the land of a thousand gods, never ceases to surprise the world by invoking divine intervention in almost all human activities. Taking advantage of the unmatched devotion of Indians toward their gods, traffic cops in the southern city of Bengaluru took the help of Lord Ganesha to drive home the message of road safety.

​In a viral video, a man dressed as Lord Ganesha, or the "lord with an elephant head," is seen distributing helmets to riders.

​According to Hindu mythology, Lord Ganesha, the son of Lord Shiva and Parvati, had his head severed by his father in a fit of rage. His human head was later replaced by that of an elephant, thus Ganesh becoming the Lord with a human torso and elephant head. Devotees interpret his elephant head as indicating intelligence, discriminative power, fidelity, or other attributes thought to be had by elephants. The large elephant ears are said to denote wisdom and the ability to listen to people who seek help.

Our Bengaluru City Yamaraj, Mr. Veeresh Muttinamath, for bringing awareness among traffic violators, was felicitated and appreciated with a reward of Rs.10,000 by the Commissioner of Police today evening. pic.twitter.com/j8lgb4yCm8

​The Ganesha campaign is yet another innovative campaign in a series of people-friendly initiatives taken by the Bengaluru traffic police to make people aware of their personal safety while driving. This popular drive has come after their previously successful venture involving "Yamraja," the messenger of death.

The Bengaluru city cops are also famous for their street plays winning the hearts of not only locals but also of Netizens worldwide.

US Officials Worry About Road Safety With New Marijuana Laws