The South Korean Defense Ministry announced Tuesday that it wants to test the waters for a “full-scale pullout” of its forces from the Demilitarized Zone separating it from North Korea by removing some guards and equipment “on a trial basis.”

As the name implies, the DMZ itself contains sparse military forces and border guards, aside from the million-odd landmines littering the 2.5-mile-wide space between the border fences. However, not far from the frontier, about 70 percent of the South Korean army is deployed, along with the US' 8th Army, the Straits-Times notes. 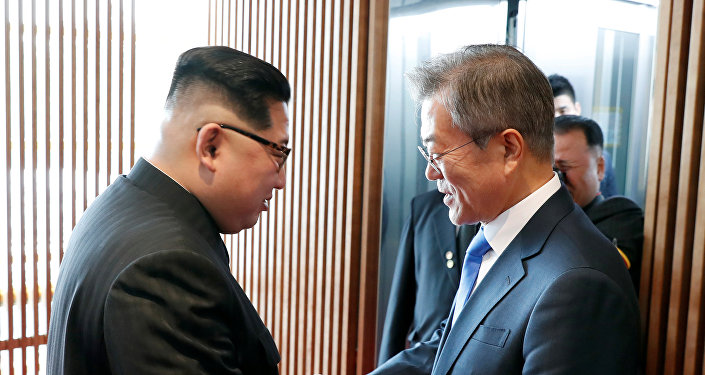 On Tuesday, South Korean Defense Ministry officials told the National Assembly's Defense Committee about the ministry's plans to implement one of the key points agreed upon between the leaders of North and South Korea at Panmunjom — itself within the DMZ — in April, Yonhap News Agency reported.

"South and North Korea agreed to completely cease all hostile acts against each other in every domain, including land, air and sea, that are the source of miliary tension and conflict. In this vein, the two sides agreed to transform the demilitarized zone into a peace zone in a genuine sense by ceasing as of May 1 this year all hostile acts and eliminating their means, including broadcasting through loudspeakers and distribution of leaflets, in the areas along the Military Demarcation Line," said the Panmunjom Declaration, agreed upon by South Korean President Moon Jae In and North Korean leader Kim Jong Un on April 27.

The South has already ended its cross-border broadcasts of pop music and propaganda and cancelled key military maneuvers with the US, while the North has begun the process of dismantling its nuclear weapons and ballistic missile programs, in accordance with a later agreement between Kim and US President Donald Trump in June, but toward which Kim and Moon pledged they would work at their April encounter.

@GEO102SUNY Attached below are maps showing the DMZ of North and South Korea pic.twitter.com/DEV3yA2k1z

​"To realize the transformation of the DMZ into a peace zone, as stated in the Panmunjom Declaration, [the ministry] is seeking a plan to expand the [withdrawal] program in stages after pulling out troops and equipment from the guard posts within the DMZ," the ministry said, Yonhap reported.

Before the announcement, the Straits-Times speculated that such a move was coming, noting that two likely candidates for removal from the frontier are South Korea's 2nd Marine Corps Division and the Army's 7th Mechanized Corps. However, the Yonhap report did not name any military units or give any idea about how many troops a "trial basis" would entail.

Further, the Defense Ministry expressed the desire "to reduce the guard personnel and rearrange firearms" in the truce village of Panmunjom.

Also at issue is the western sea boundary, a perennial flashpoint about which the two Koreas do not agree. The April declaration also pledged to "devise a practical scheme to turn the areas around the Northern Limit Line in the West Sea into a maritime peace zone in order to prevent accidental military clashes and guarantee safe fishing activities," and the ministry expressed its intention to take steps toward calming tensions there as well.

The DMZ was agreed upon by the Armistice Agreement of July 27, 1953, which ended active combat during the Korean War but did not establish a "regime of peace," such as Moon and Kim expressed a desire to now create. The 38th parallel north roughly marks the path of the 148-mile-long DMZ.