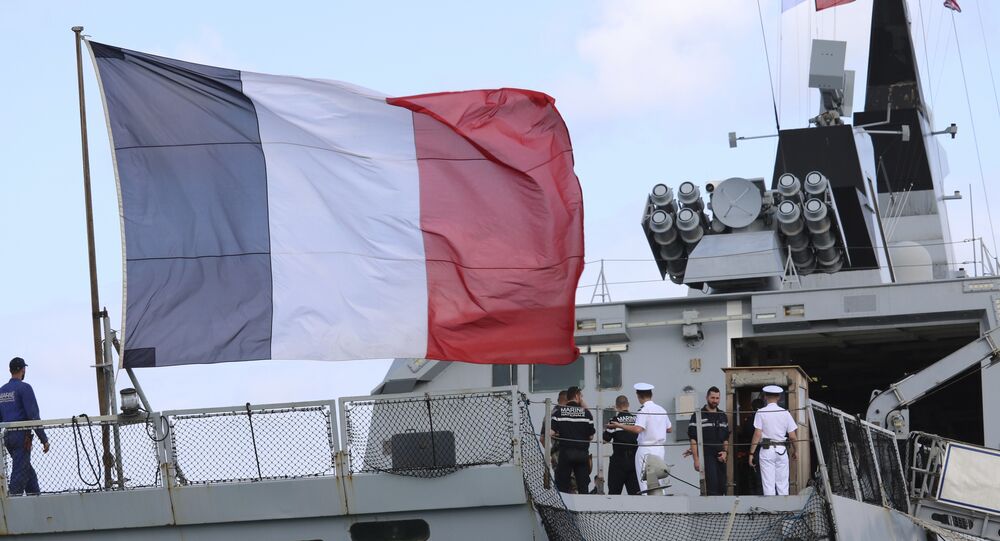 PARIS (Sputnik) - France is present in the South China Sea to protect its own territorial interests rather than act as a counterweight to Beijing, experts told Sputnik.

French and UK defense ministers said in early June that they would send warships to the South China Sea, possibly with a detour to the waters claimed by China.

Despite the increased activity in the region, it would be an exaggeration to think that France is trying to balance Beijing's actions, Gen. Jean-Claude Allard, a senior research fellow at French Institute for International and Strategic Affairs (IRIS) think tank, who used to serve as the French representative in the US Central Command, believes.

"The idea of being a counter-weight to China is probably exaggerated; it is simply the matter of presence," Allard told Sputnik.

© AFP 2020 / STR
Chinese Navy Runs Anti-Aircraft Drills in South China Sea After B-52 Flyby
The South China Sea is home to several territorial disputes, with Brunei, China, Malaysia, the Philippines, Taiwan, and Vietnam all laying various claims. In particular, China, Taiwan, and Vietnam are arguing over the Paracel Islands, the Pratas Islands, and the Spratly Islands.

"Clearly, if there is a state showing power in the region, like China in the Pacific, it’s not necessarily against it, but simply a means to show that France is interested in its territories and is ready to protect them in a way of not exposing them," Allard said.

Meanwhile, French overseas territories of New Caledonia and French Polynesia are located in the South Pacific Ocean, east of Australia and southeast of China.

"There is French population living in those regions, there are economic interests, so this is a good geopolitical move to show that 'we are capable of protecting them as well as our population.' This is clearly about geopolitics. If the state has territories somewhere, it’s good geopolitics to deploy forces there," Allard said.

Jean-Vincent Brisset, a retired brigadier general of the French Air Force and a senior research fellow at IRIS, agreed that France was simply protecting its interests in the region.

"France is highly present in the Pacific from the territorial point of view, and therefore it has real interests there. It took little care of them, but it started handling these territories after 2014 when the first navy patrol was sent in that area," Brisset said.

© REUTERS / U.S. Navy/Handout
China Deploying Missile Systems on Disputed Spratly Islands – Reports
The South China Sea is a busy commercial waterway, so holding control of its parts may be a key to a successful trade strategy. France is looking to protect not only its own interests but global trade as well, Brisset said.

Brisset pointed out that only the United States so far had been able to act as a counterweight to China.

"Among the riparian countries of the South China Sea, China is a leading military power, and they are establishing their bases nearly everywhere … And this taking of possession shows real power because it shows an attitude of superiority to others. So far the United States was the only country to show the counter-power to the Chinese," the military expert said.

The United States has insisted on its right to conduct maneuvers in the South China Sea as a way to uphold freedom of commerce and navigation. As recently as in early June, Lt. Gen. He Lei, vice president of the People's Liberation Army's Academy of Military Science, said that Beijing saw US criticism of China's claims in the area as meddling in Chinese internal affairs.