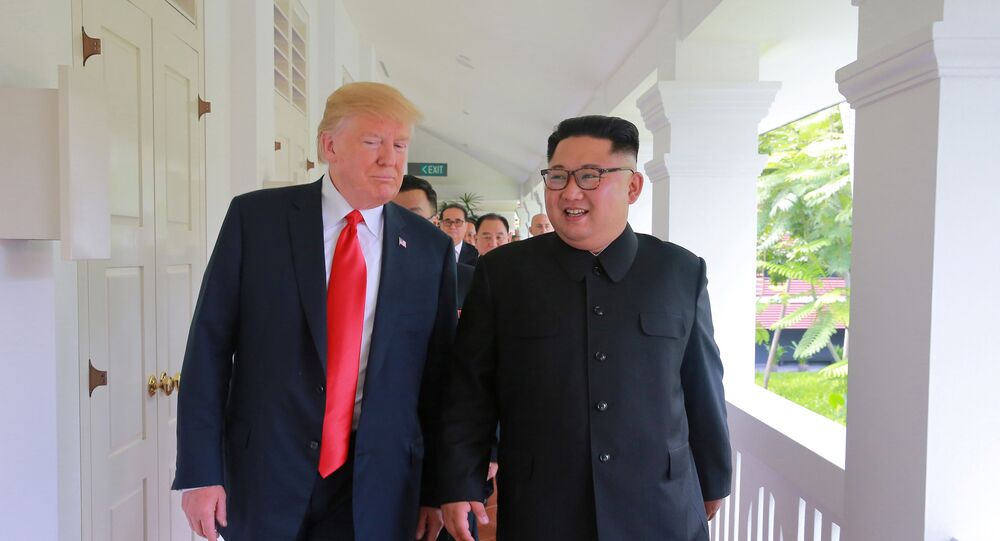 Russian President Vladimir Putin met on Thursday with North Korean Parliament Head Kim Yong-nam and noted that the meeting between the US and North Korean leaders is the first step towards a full resolution.

Russia intends to promote a resolution of the North Korea situation using peaceful means, Putin said, adding that the meeting between Trump and Kim Jong-un has reduced the general level of tension on the Korean Peninsula, and has disposed of the prospect of a major military conflict.

"We also welcome and value the results of the meeting of North Korean leader Kim Jong-un and US President Mr. Trump which took place very recently, on June 12," Putin said at a meeting with Kim Yong-nam, the President of the Presidium of North Korea's Supreme People's Assembly.

According to Putin, Russia believes that this is "only a first step" towards a complete resolution to the issue in the region.

"This step was taken thanks to the goodwill of both leaders. Without a doubt, this creates conditions for further progress and lowers the level of tension on the Korean Peninsula," Putin said.

Putin said that the meeting had also led to the emergence of "prospects for resolving all issues via peaceful, political, diplomatic means."

© REUTERS / Susan Walsh/Pool
Kim-Trump Summit Proved Putin Right, Only Dialogue Can Solve Crisis – Kremlin
The Russian president has confirmed his invitation for Kim Jong-un to visit Russia, saying that the talks could be held on the EEF sidelines or organized separately via diplomatic channels.

"I ask you to convey to the leader of North Korea, Comrade Kim Jong-un, our invitation to visit Russia. In particular, this could be done within the framework of the Eastern Economic Forum in Vladivostok in September this year. We can do this separately, and we can arrange it unrelated to some international events. We can arrange this through the Foreign Ministry," Putin said at a meeting with the high-ranking North Korean official.

On June 12, Trump and Kim met on the Singaporean island of Sentosa. Following a one-on-one meeting and subsequent negotiations in an expanded format, the leaders signed a document showing their commitment to establish new bilateral relations and build a lasting peace on the Korean Peninsula.

Shinzo Abe, Kim Jong-un May Meet in Vladivostok on Sidelines of EEF – Reports