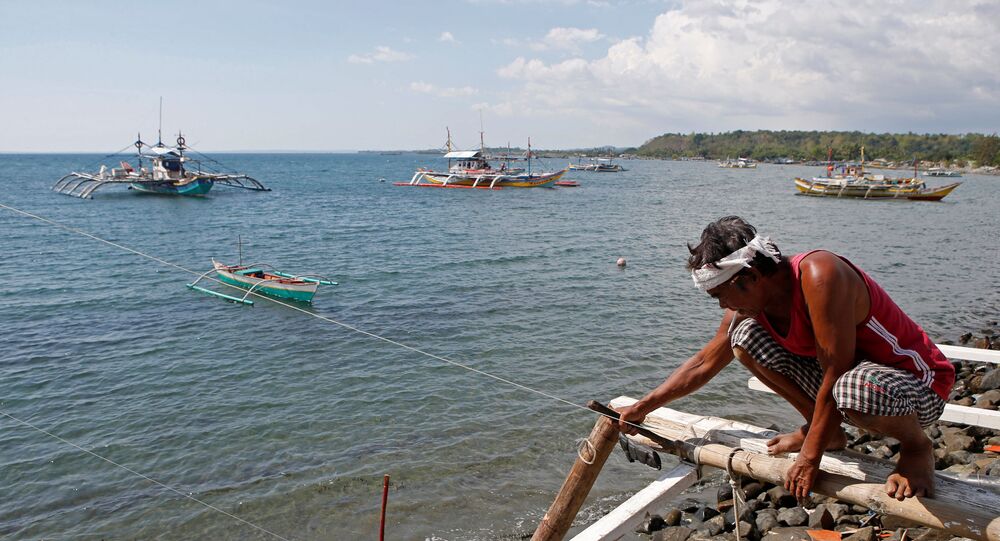 Beijing claims numerous islets and shoals in the South China Sea, including Scarborough Shoal, and have spent the last few years reclaiming significant land around them to form stable islands large enough for military installations. The reef, also claimed by the Philippines, is 142 miles away from the Philippine island of Luzon, the South China Morning Post reported.

"The (Chinese Coast Guard personnel) board our boats, look at where we store the fish and take the best ones. We cannot do anything because their huge vessels are there," Romel Cejuela, one of the fishermen, said, the South China Morning Post reported Monday.

"We have addressed this issue to the Chinese and we are demanding that the Chinese take steps to stop the coastguard from doing these acts," Roque told reporters Monday.

"That is unacceptable. That is why we informed the Chinese we will not allow fish to be taken from our countrymen," he added.

On Monday, the Chinese Foreign Ministry announced that authorities were investigating the allegations.

"Out of friendship, China has made proper arrangements for Filipino fisherman," Chinese Foreign Ministry spokesperson Geng Shuang said in a press conference Monday.

This is not the first time the two countries have feuded over fishing rights near the shoal, either. Since 1999, China has imposed annual fishing bans from May to June on the waters near the shoal to drive Filipino fishing boats away, but in 2016 the Philippines shot back, instituting its own competing ban on fishing in the waters around the shoal, claiming it was their right to control fishing around their territory, the Telegraph reported.

The South China Sea contains many islands, reefs and shoals presently controlled and occupied by the People's Republic of China, but also claimed by several other nations include Vietnam, Taiwan, Cambodia, Brunei and Philippines. Aside from the enormous amount of international sea trade that passes through the area, it is also believed to contain large amounts of as-yet unexplored oil and natural gas deposits.

An American-mediated deal in 2012 between the Philippines and China was supposed to compel both parties to withdraw from the area until a more comprehensive agreement over sovereignty could be signed, but while Philippine forces left the shoal, Chinese forces have remained, the New York Times reported.

In May, the US decided to cancel its invitation to China to participate in the maritime 2018 Rim of the Pacific drills because of the South China Sea's "militarization," after several Chinese Air Force bombers landed on islands and reefs in the area.

In 2016, an international tribunal in The Hague ruled that Beijing's claims to sovereignty over South China Sea waters had no legal basis. China rejected the court ruling and argued that the tribunal had no jurisdiction in the case.