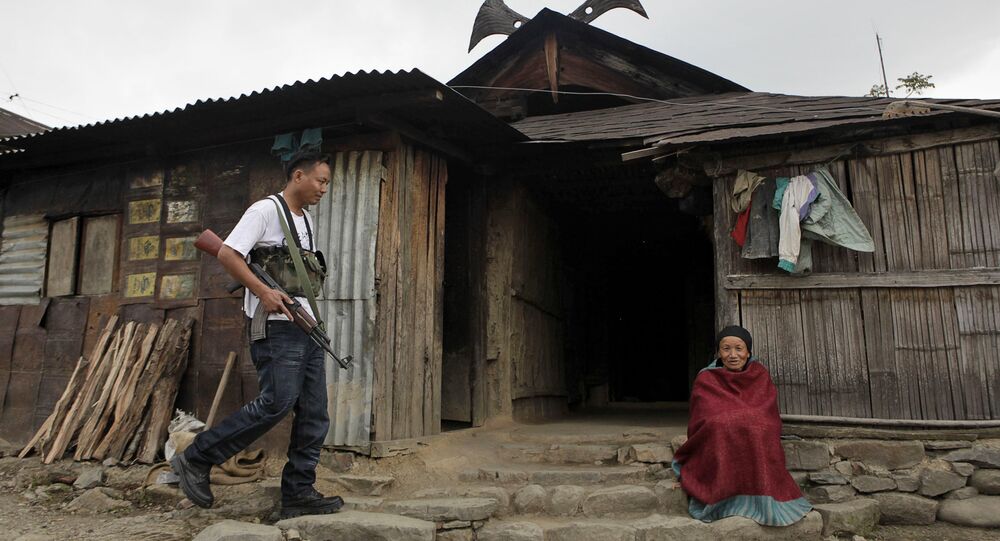 Insurgent groups NSCN-K and NSCN-IM have been demanding a restructuring of the northeastern part of the Indian union so that a separate state for the Naga tribes called Greater Nagalim can be carved out. They also want a small territory of Myanmar to be included in the proposed state.

New Delhi (Sputnik) — In what could prove a major achievement of the Narendra Modi-led Indian government in restoring normalcy in the country's restive northeastern region, seven militant groups of the Naga tribes have agreed to sign a peace accord with the government in next few weeks.

Sources told Sputnik that representatives of six Naga political groups and the NSCN-IM (National Socialist Council of Nagaland-Isak-Muivah faction), who have been meeting with the government's interlocutor and other officials for the past month, have agreed on most of the issues and the peace accord could be signed at 'any time'.

"The Nagaland government will be holding a broader consultation with Naga groups in Kohima this week, which could pave the way for a final settlement. We expect a single accord with all the groups any time," a government official told Sputnik.

The indications of a peace accord had started coming in since the formation of the Naga Democratic People's Party-led government in Nagaland earlier this year. A major announcement was made on April 7 by India's Minister of State for Home Affairs, Kiren Rijiju, when he said that the NSCN (IM) had already dropped the word 'sovereignty' and other "serious issues" from their charter of demands.

NSCN-IM has dropped sovereignty and some sensitive issues.
Union Minister of State for Home Kiren Rijiju on Saturday said Centre will come up with tangible solution to several decade-old Naga problem. He assured that this will not have any adverse impact on other Northeast states pic.twitter.com/zyiZbG9arV

​​Although negotiations between the militant groups and the Indian government had been going on for last two decade, in a move that surprised many, in 2015 the Narendra Modi government signed a framework agreement with NSCN-IM to find a solution to the Naga issue.

© AFP 2021 / FINDLAY KEMBER
Indian Army Strikes Naga Insurgents Along Myanmar Border
The Naga groups led by NSCN-IM have been fighting for ‘Greater Nagaland' wherein it wants to restructure the boundary of four northeastern states which have Naga population. The states like Assam, Manipur, Arunachal Pradesh and Nagaland have more than 1.2 million Naga populations. The people from these states have been opposing any move of restructuring the boundary or giving any additional power to Naga people within the present borders of the state.

"Government is aware of apprehensions expressed in Assam, Arunachal Pradesh and Manipur. These are speculative in nature. Adequate care is being taken to protect the interests of all stakeholders," Kiren Rijuju, India's Minister of State for Home Affairs said earlier this year responding to a news report which said that large chunks of territories of states like Manipur, Assam and Arunachal Pradesh were to be included in the proposed Greater Nagalim under the agreement.

READ MORE: India Braces Itself for Influx of Refugees, Seals Its Borders With Myanmar

The Naga groups, which had started violent protests just after independence for the cause, have had ceasefire agreements with the government since 1997. However, with the National Socialist Council of Nagaland — Khaplang (NSCN-K) walking out from the dialogue process with the Indian government in 2015, the peace process got derailed. The Indian government termed NSCN-K as an extortion group which operates from Myanmar and has nothing to do with Naga issues and of started military action against the group.

Syrian Military: Insurgents to Be Forced to Free All Hostages in Ghouta