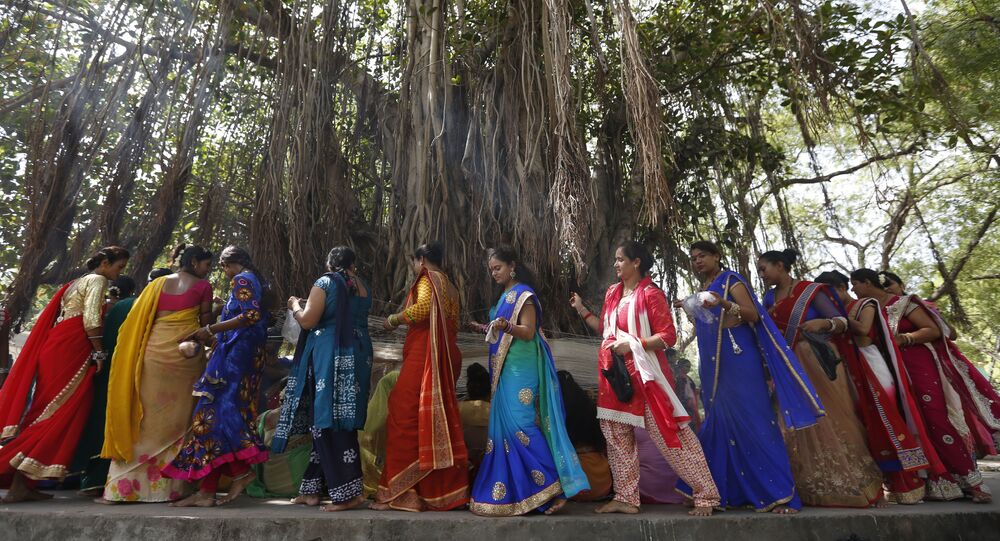 The Pillalamarri Banyan tree, as it is locally known, is one of the main tourist attractions of the south Indian state of Telangana. The tree, from a distance, gives the appearance of a small hillock with green foliage. The 700-year-old banyan tree and its branches extend over an area of three acres.

New Delhi (Sputnik): Forest officials in India are making an all-out effort to pump life into the world's second largest banyan tree, which has been infested by fungus and termites leaving it vulnerable to decay. The legendary ficus tree located in Pillalamarri of the Mahabubnagar district in the southern state of Telangana is being administered pesticides diluted in a saline drip in order to kill the termites.

"We are very much concerned about the revival of the Pillalamarri Banyan tree which is the world's second largest banyan tree and also a major tourist attraction of the district. Our effort of administering saline water to the trunks of the tree to get rid of termite infestation has been successful and now the legendary tree is in good health. But we are keeping a constant watch," S. Narender Reddy, Divisional Forest Officer (DFO), Mahabubnagar told Sputnik.

World's second largest Banyan tree in Pillalamarri of Mahabubnagar district in Telangana is on saline drip as part of the rejuvenation of the tree that is almost dying.The tree is given treatment by injecting diluted chemical to kill termite population that infested it. pic.twitter.com/0ADu5jbAd2

Earlier last year, one of the trunks of the huge tree snapped, triggering a wave of panic among residents who revere the tree as their ancient heritage.

"I have been watching the tree for the last 40 years. Now the tree has lost most of its foliage. Branches and trunks are infested. Earlier, tourists were allowed to touch and sit on the branches which also harmed the ancient tree. This tree is a heritage of our state and country so we must save the tree," a local resident, Rammaiah S told Sputnik.

Just Because It Can: Beetle Gnaws Through Tree Branch