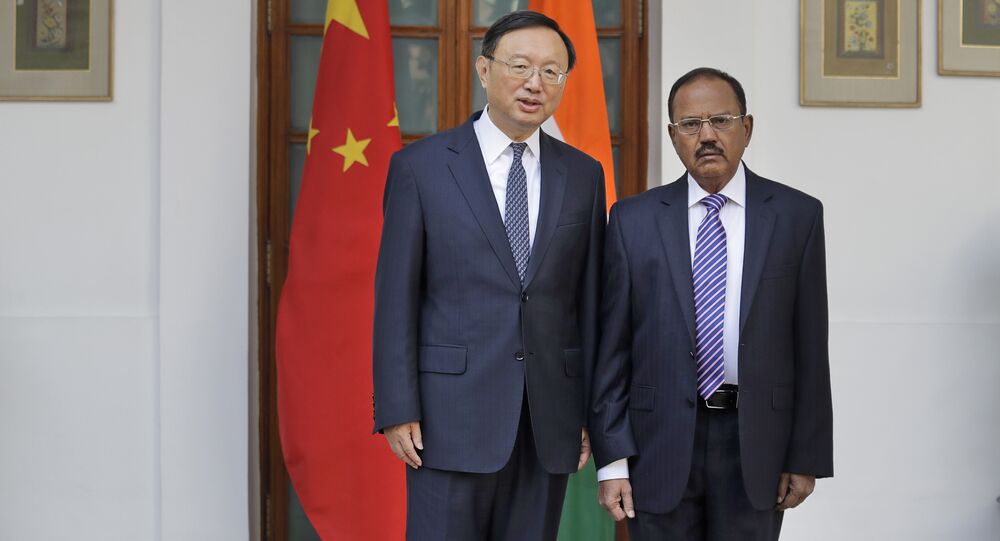 Ajit Doval and Yang Jiechi are the top bureaucrats of India and China respectively who are credited with having devised a way out of the military standoff between the two countries in the Doklam plateau last year.

New Delhi (Sputnik): India's National Security Advisor Ajit Doval on Friday met China's top diplomat Yang Jiechi, a member of the political bureau of the Central Committee of the Communist Party of China and director of the Central Foreign Affairs Commission in Shanghai, according to the Indian Embassy.

Ajit Doval's meeting with Jiechi comes as a precursor to important visits to Beijing by India's External Affairs Minister Sushma Swaraj and Defense Minister Nirmala Sitharam during the last week of this month. Later in June, Prime Minister Narendra Modi will be meeting with Chinese President Xi Jinping on the sidelines of the Shanghai Cooperation Organization (SCO).

The bilateral engagements are being seen as attempts by the two neighbors to iron out differences that had peaked during the Doklam standoff when Indian forces and Chinese forces came face to face over Chinese road building activities in the Doklam plateau – an area disputed between China and Bhutan.

Thorny issues include those relating to the boundary, China's apparent aversion to India's entry into the Nuclear Suppliers Group, China's attempt to block the designation of Pakistan-based terrorist Masood Azhar as a global terrorist by the UN and India's objections to the China-Pakistan Economic Corridor, part of which passes through the disputed part of Kashmir.