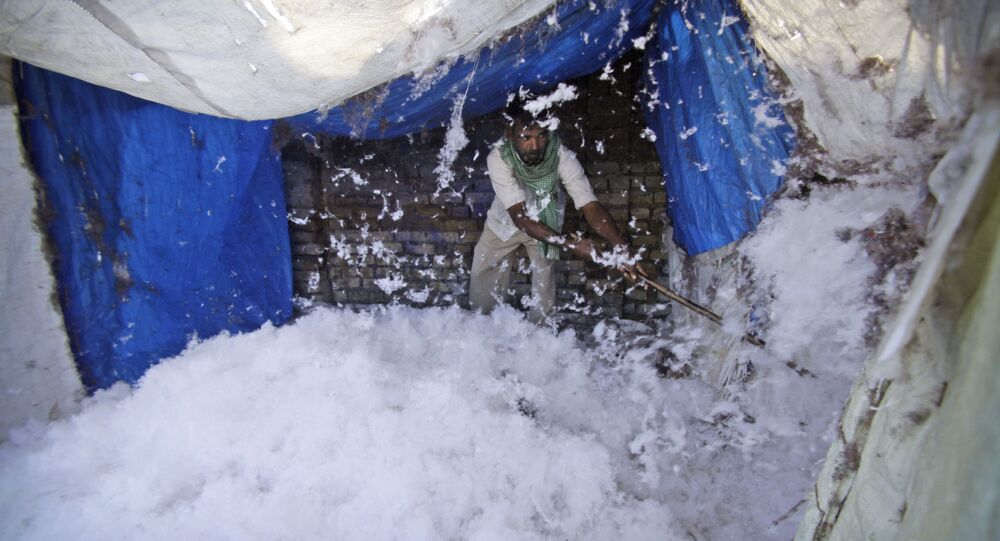 Swadeshi Jagran Manch (SJM), a fringe group which has considerable political clout, has accused Monsanto of fooling Indian farmers by making false claims about the Bt trait in the bollworm-guard variant of the genetically modified cotton seeds it has been selling in the Indian market.

New Delhi (Sputnik)-  US Agri-tech firm Monsanto may have to financially compensate Indian farmers as the Swadeshi Jagran Manch — a sister organization of Prime Minister Narendra Modi's Bharatiya Janata Party (BJP)- has mounted pressure on the government to ask the firm to refund the amount it has been charging for the Bt trait in the genetically modified cotton seeds it has been marketing in India. The SJM has argued that since the Bt trait has been unsuccessful in protecting cotton crops against pink bollworms, the company must compensate for the losses incurred by Bt cotton farmers.

Moreover, the SJM has also demanded that the government should reduce the price of seeds by removing the trait value from Bt cotton seeds. The demand comes a few days ahead of the announcement of cotton seed prices for the financial year 2018-19, which starts on April 1, 2018. The government of India fixes the price of Bt cotton every year under the Cotton Seeds Price (Control) Order, 2015 (CSPCO).

"Despite the Bt trait failing and leading to severe losses to the farmers, particularly in Maharashtra, the controller under the CSPCO, who enjoys tremendous powers under the Essential Commodities Act, did not direct the trait developer Mahyco Monsanto Biotech (India) Private Limited (MMBL) which collected about INR 5 billion rupees ($77 million) in 2016-17 and 2017-18 from the farmers under CSPCO to pay any compensation to farmers who are in distress," Ashwani Mahajan, National Co-Convenor, SJM said in a letter to India's agriculture ministry.

The government of Maharashtra, one of India's largest cotton-producing states, has announced that they will compensate the farmers, but the compensation amount has yet to be disbursed.

"The directions from the Ministry of Agriculture would have accelerated actions from Maharashtra (to collect the compensation from the trait developer MMBL) to give some relief to farmers who suffered due to heavy infestation of pink bollworm (PBW)," Ashwani Mahajan told Sputnik.

Bollgard's Grey Market Haunts Monsanto India as Farmers Demand Compensation
Government data suggest that MMBL has collected approximately $1.2 billion so far for the Bt trait from the farmers since 2002.  SJM has also said that the claim made by MMBL and its subsidiaries about the increased productivity of cotton seeds due to its Bt trait is a blatant lie and |it is only to cover up the failures of Bt cotton and justify the collection of $1.2 billion in the form of exorbitant trait value."

SJM is considered to have a strong influence in the policy decisions of the current Bharatiya Janta Party-led government in India; it also blamed the officials in the agriculture ministry for not countering the ‘false claims' made by MMBL.

"Monsanto is benefiting and farmers are paying trait value in return for nothing and the ministry is inadvertently responsible for this?" SJM Convener Mahajan has written in his letter to the Agriculture Ministry.

MMBL has a market share of almost 95% in India's cotton seeds market. Currently, only Bt cotton seeds of Bollgard I (since 2002) with Cry1Ac gene and Bollgard II (since 2006) with Cry2Ab gene are approved for sale on a commercial scale.

READ MORE: Bayer Says to Continue Work in Russia Despite Problems Over Merger With Monsanto

Nearly 50% of the cotton crops in India were reportedly damaged due to an unprecedented pink bollworm attack — in some areas like Telangana the loss was up to 100%. Activists blame pesticide and seed companies for selling both Bollgard II seeds and those selling seeds with the HT transgenic gene for the abnormal growth of cotton plants and unprecedented pink bollworm attack.