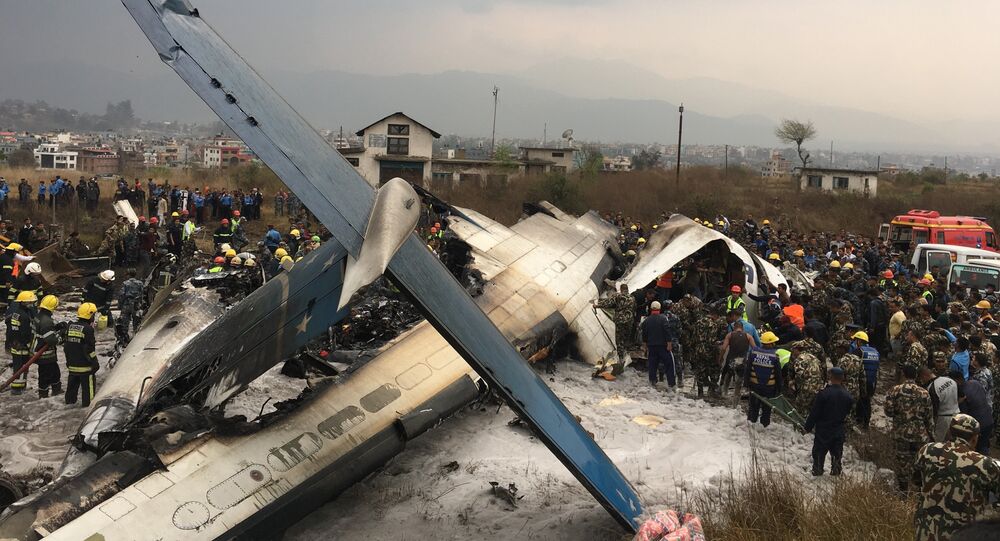 At least 49 people were killed when the plane heading form Bangladesh's capital of Dhaka to Kathmandu crashed, according to local media. Local police said earlier to Sputnik that the death toll stood at 39.

"There are 31 passengers rescued and sent to the hospital for treatment. Eight persons were dead in the hospital and 31 dead bodies recovered in the airport," Manoj Neupane, Nepal police spokesman, said, adding there were 67 passengers and four crewmembers on board.

Earlier, the Kathmandu Tribune reported that at least seven people had died in the incident with another 18 sustaining injuries. It also reported that 17 people had been rescued and hospitalized.

The Russian Embassy in Nepal said there were no Russian citizens among the passengers.

According to the Kathmandu Post, the incident occurred when the aircraft missed the runway and crashed on a football field to the east of the airport, bursting into flames.

"We are in the process of putting out the fire and rescuing the passengers," airport spokesman Prem Nath Thakur said to reporters immediately after the crash.

The airport authorities said that the technical malfunction could have caused the crash.

Smoke seen from Kathmandu airport amid reports of a Bangla plane crash in Kathmandu pic.twitter.com/a2VL2rOrMG