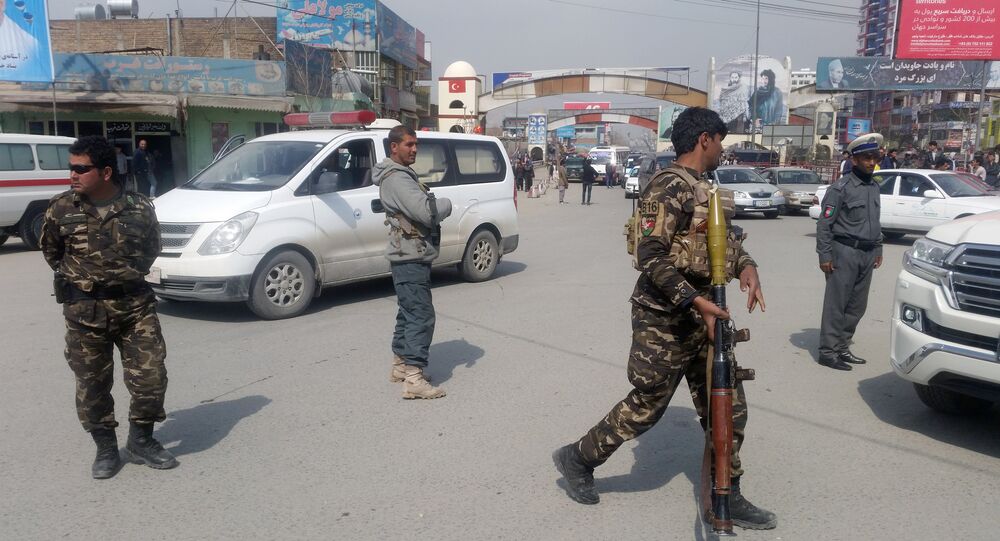 There has been no immediate claim of responsibility following reports of an alleged suicide attack near a mosque in the city of Kabul as Afghanistan continues to suffer in the fight against terrorists such as the Taliban and Daesh.

A blast hit the Afghan capital on Friday, leaving nine people dead and 18 injured, local media reported. According to the Khaama Press News Agency, a suicide attacker conducted the explosion near a place where a ceremony to mark anniversary of the death of Afghan politician Abdul Ali Mazari was taking place.

The incident reportedly took place in the 6th police district of Kabul.

#BREAK At least one person killed and five others wounded in an explosion in #Kabul PD6. No details about the cause of the blast.

© AP Photo / Allauddin Khan
Taliban Kills at Least 18 Afghani Soldiers During Assault on Military Base
Afghanistan is in a state of political and social turmoil, with government forces fighting the continuing Taliban insurgency. The instability has persisted in the country since the 2001 US-led invasion to defeat the Taliban*  and al-Qaeda* in the wake of the 9/11 attacks in the United States.

The crisis in the country has prompted the emergence of local cells of other extremist organizations such as Daesh*, which is outlawed in Russia and numerous other countries.

The lack of control and instability have made the country home to the largest opium poppy production and distribution network in the world.

The Taliban, al-Qaeda, Daesh are terrorist groups outlawed in Russia.