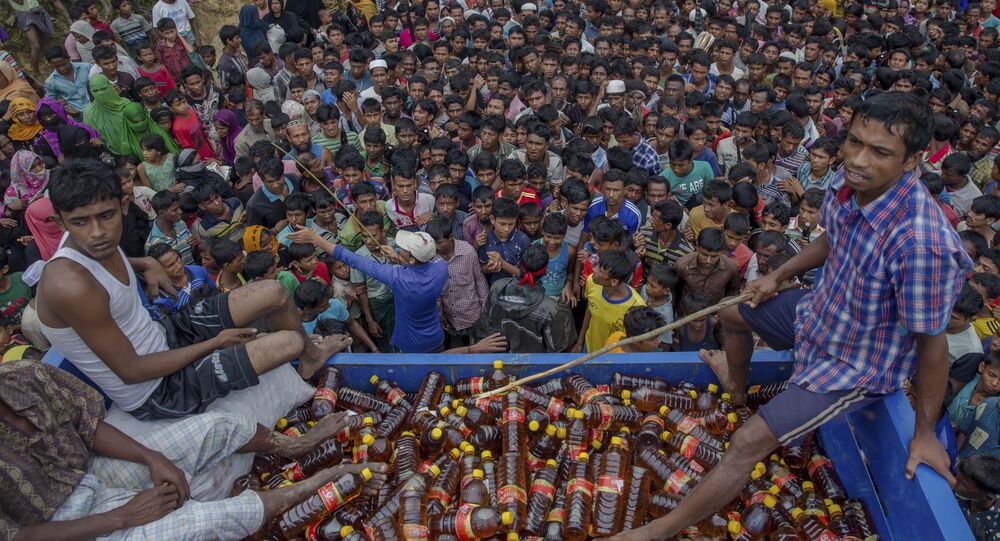 The military of Myanmar has admitted that its soldiers killed 10 captured Rohingya Muslims, who they labelled “terrorists.” The executed Rohingya were reportedly forced to dig their own grave at gunpoint by both government forces and Burmese villagers.

Government forces had been conducting a "clearance operation" in a region about 30 miles north of the state capital of Sittwe when "200 Bengali terrorists attacked using sticks and swords."

The Facebook statement goes on to say that the militant attacks had destroyed their military vehicles with explosives (despite having just noted that they were armed with melee weapons). This meant that "there were no conditions to transfer the 10 Bengali terrorists to the police station and so it was decided to kill them."

Myanmar insists that the Rohingya minority are illegal migrants from Bangladesh, hence the references to "Bengalis" in official statements.

The villagers assisted in the execution, according to the statement, because they wanted revenge on the Rohingya militants who had killed their family members in the past. "Action will be taken against the villagers… and the security force members who violated the rules of engagement according to the law," the statement said, adding that those who failed to report the incident would be similarly punished.

In August 2017, tensions between Myanmar's Buddhist majority and its Rohingya Muslim minority in Rakhine province came to a head. Government forces began a sweeping crackdown against the minority group following a Rohingya militant attack on August 25.

The crackdown has rapidly spiraled into one of the worst human rights crises in the world, with more than 650,000 Rohingya fleeing from Myanmar to Bangladesh to escape government repression. Those who have remained in Myanmar have been stripped of their land and labeled stateless.

While violence against the Rohingya has become commonplace, with thousands of deaths since the crackdown began, this is a rare occasion where Naypyidaw has claimed responsibility for the innumerable atrocities of which they have been accused.

Amnesty International described the statement as "a sharp departure from the army's policy of blanket denial of any wrongdoing. However, it is only the tip of the iceberg and warrants serious independent investigation into what other atrocities were committed amid the ethnic cleansing campaign that has forced out more than 655,000 Rohingya."
The US State Department, the UN, Amnesty International and Malaysia have all described actions taken against the Rohingya as "ethnic cleansing" as well as systematic crimes against humanity.

Although the Rohingya consider themselves an ethnic minority of Myanmar, many of the Buddhist majority consider them illegal foreigners from Bangladesh. The two groups fought on opposite sides of World War II, with the Rohingya supporting the Allies and the Rakhine Buddhists allying with the Imperial Japanese./.r