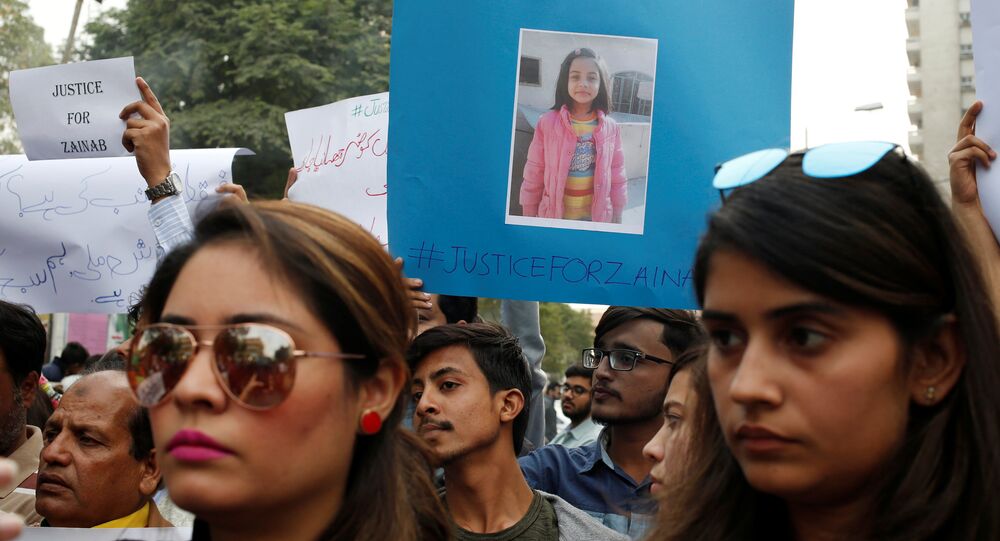 The six-year-old child was abducted, raped and murdered in the city of Kasur on Tuesday while her parents were in Mecca performing a religious pilgrimage.

Mass protests have engulfed Kasur after Zainab Ansari’s body was found in a garbage heap two days ago, where she reportedly had been dumped after being brutally slaughtered. Demonstrators have been outraged, complaining of police inaction in the city, as Zainab is ostensibly the eighth minor to have been raped and killed there in the past 12 months.

Up to 1,000 protesters have taken to the streets to express their indignation with the reluctance shown by the police in finding the child’s murderer.

"They have thrown stones on the buildings of the government hospital, police and deputy commissioner's office… Security is deployed and trying to control the situation," police spokesperson Muhammad Sajid told AFP.

© AP Photo / B.K. Bangash
People lights candles during a memorial for Zainab Ansari, an 8-year-old girl who was kidnapped, raped and killed last week in Kasur in Islamabad, Pakistan

"We want justice. We want the culprit to be brought in front of us. We don't want an innocent to be presented as the culprit and killed just to wash this case," said one of the protesters.

According to information given by an anonymous police source, on the first day of the unrest at least two demonstrators were killed when the police fired into the crowd, as protesters attempted to storm a government building in the city.

The government of the Punjab province has announced a reward of 10 million rupees ($90,000) for any clue leading to the murderer’s arrest.