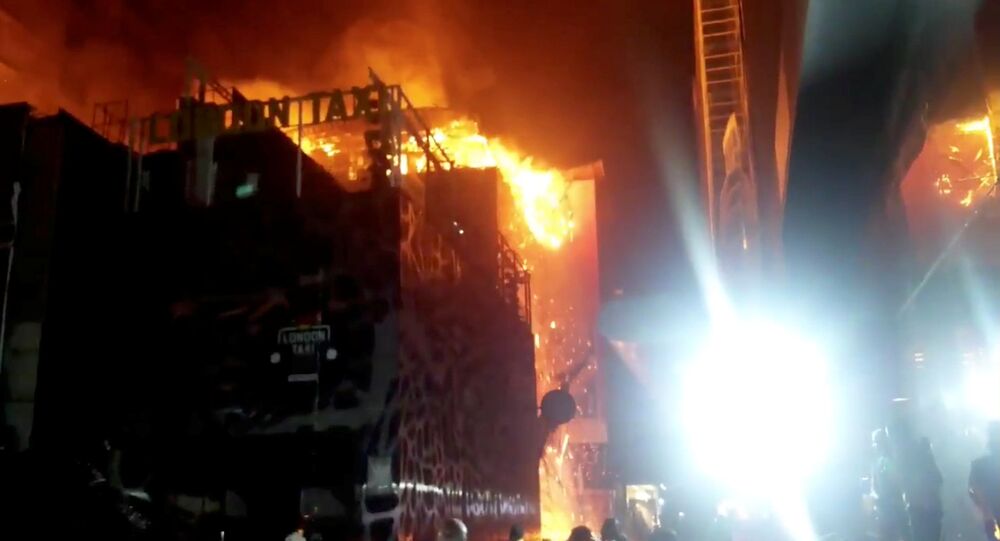 Four members of a family have died after a fire broke out at a residential building in the sprawling Bohra Colony in Mumbai. This is the third such incident in Mumbai within a fortnight.

New Delhi (Sputnik) — According to the Mumbai state administration, the blaze was reported at around 2:00 a.m. (Indian Standard Time) in the Maimuna Building of Bohra Colony.

"At least nine persons trapped in the flat were retrieved by the fire brigade, the injured have been admitted to the Holy Spirit Hospital,"  a firefighter informed the media.

#WATCH: Visuals of fire that broke out at Maimoon building in #Mumbai's Marol in the late night hours and claimed four lives. Situation now under control pic.twitter.com/nLp0zL9rdU

© REUTERS / Poonam Burde
Fire at Rooftop Pub in Mumbai Kills 15 (VIDEO)
It is the third major fire incident in Mumbai in the last fortnight. Earlier on December 29, 15 people died in a blaze that started at an upscale rooftop pub and later engulfed the entire four-story building. A preliminary investigation revealed major corruption in license distribution in the building leading to several arrests. Earlier on the 18th of December, 12 laborers were charred to death after a fire broke out at a snack factory in Mumbai's Sakinaka area.

Following the second incident, civil authorities launched a massive crackdown on premises that were not compliant with all fire safety norms. Officials have so far inspected over 600 establishments and demolished illegal constructions or alterations at over 300 hotels and pubs.