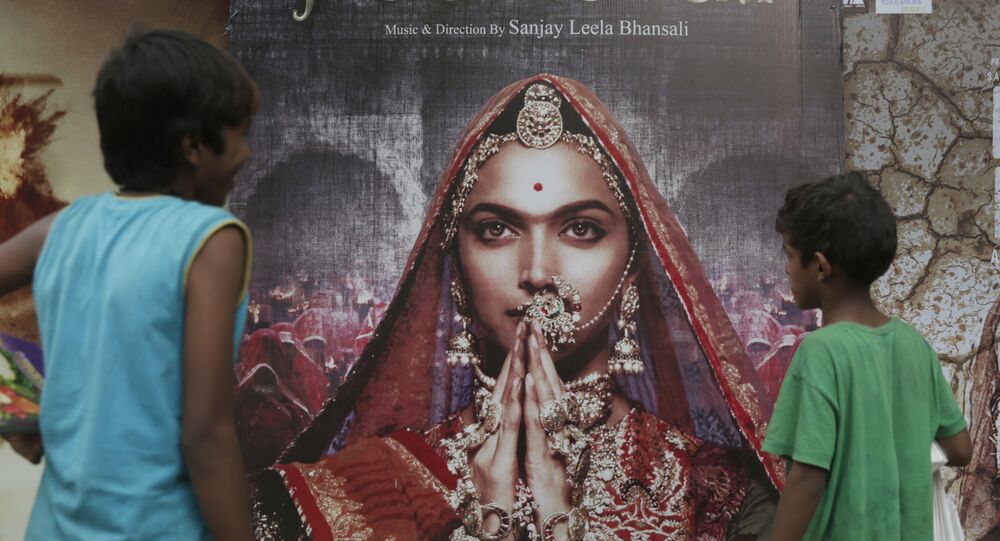 In spite of decades of independence from British rule, and the fact that royal titles ceased to exist after the 70s, the clout of the royal successors still remains; recent evidence of this is the opposition to the upcoming Hindi film ‘Padmavati.’

New Delhi (Sputnik) — Taking the row over Padmavati to a newer height, a member of an influential erstwhile royal family has written to the Indian government to remove the head of the censor board for granting clearance for public screening of the controversial film.

© CC0
Mid-Air Nightmare: Molestation of Teenage Star During Flight Sparks Bollywood Outrage
Mahendra Singh Mewar, head of the former royal family of Mewar of Rajasthan, has written a letter to the Information and Broadcasting Minister Smriti Irani and her junior minister Rajyavardhan Singh Rathore criticizing the Central Board of Film Certification (CBFC) chairperson Prasoon Joshi for giving the green signal to Padmavati.

"One set of panelists was invited and then the film was clandestinely shown to another set. The impression being given is that the panelists who have seen the film are in agreement with the movie being released with modifications. It is, however, reliably learned that none of the panelists is in agreement with the film, two of them going on record stating the same," reads the letter, a copy of which is possessed by an Indian media house.

So the jokers at CBFC have passed Padmavati and in the process also changed its name to Padmavat? Was this the cerebral contribution of the House of MEWAR or some other silly blokes? Slowly we are seeing imbeciles taking decisions!

Many distortions in the film. And inaccuracies. Can be released as a good masala film but not historical account: Prof Kapil Kumar (invited by #CBFC to watch the film #Padmavati) tells @PoojaShali on @IndiaToday.The other invitee Arvind Singh Mewar, the erstwhile royalty concurs

​Earlier, Mahendra Singh's son Vishvaraj Singh had written a stinging letter to Prasoon Joshi stating mere cosmetic changes would not change the fact that that the movie refers to real places, his ancestors and other persons in history. The royals of Mewar have their palaces in the lake city of India in Udaipur where the film has been shot.

CBFC invited us to be part of the panel and we asked certain questions, then we come to know that some other panel saw movie and certificate was given without our consent.Very unprofessional and irresponsible by CBFC: Vishvaraj Singh,erstwhile Royal from Mewar on #Padmavati pic.twitter.com/52VTVX36YM

​Earlier, the makers of the film were threatened by the right-wing radical group led by the Karni Sena — an outfit which claims to represent the clan of the former rulers of Rajasthan. The outfit has alleged that the Hindu queen was shown in a "not-so-appropriate" relationship with the Muslim ruler Allauddin Khilji.

The director of the film Sanjay Leela Bhansali who was thrashed by a mob during a shoot has refused any inappropriate depiction of queen Padmini in the film and has called upon the people to first watch the movie before protesting.

#Padmavati Set In Kolhapur Attacked And Set On Fire, Bhansali Is Safe pic.twitter.com/VzmjyXVELV

​The release of the controversial film was pushed post all the important polling for the state assemblies of Gujarat and Himachal Pradesh on the pretext of cleaning out "historical inaccuracies."