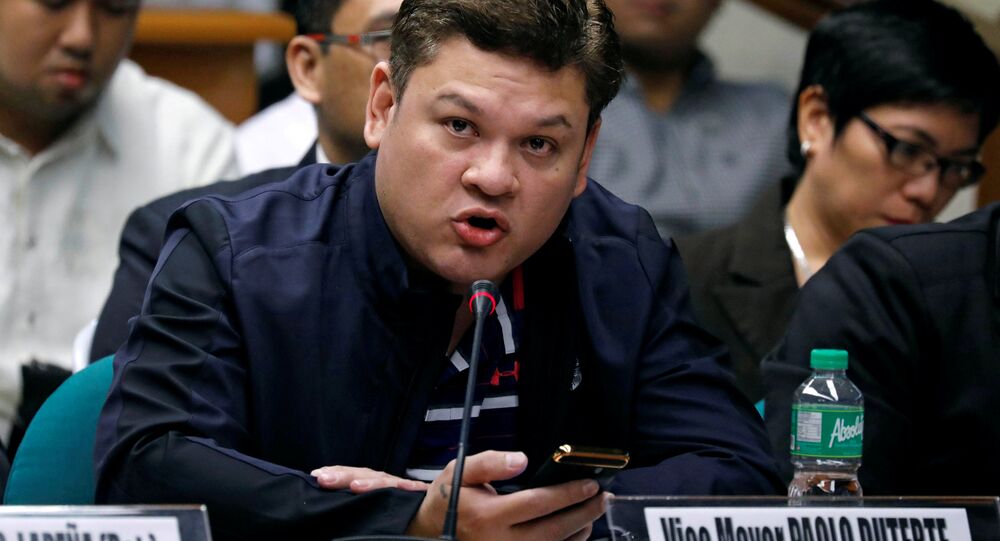 Philippines' President Rodrigo Duterte has been carrying out a year-long campaign aimed at battling the widespread use of illegal drugs.

Paolo Duterte, the son of Philippines President Rodrigo Duterte, has announced his resignation from the post of Vice Mayor of Davao city citing recent family problems and allegations of drug smuggling as the reasons for his decision, the AFP news agency reported Monday.

"These among others, include the maligning of my reputation in the recent name-dropping incident in the Bureau of Customs smuggling case and the very public squabble with my daughter," Paolo said, adding that "I take responsibility for all that has happened."

Earlier this year, an opposition senator accused Paolo Duterte of aiding drug smugglers to bring crystal methamphetamine worth some 6.4 billion pesos ($125 million) into the country from China.

Paolo Duterte denied the allegations during the September testimony in the Senate. Following the incident, Rodrigo Duterte allegedly said that he had ordered the police to kill his eldest son if it was proven that he was involved in smuggling or drug trafficking.

© AP Photo / Aaron Favila
Duterte's Martial Law Move an Attempt to ‘Consolidate Power, Silence Opposition'
Furthermore, Paolo attracted media attention last week, after he used the Facebook page of the city's vice mayor's office to rebuke his teenage daughter Isabelle after she had posted criticism of him on social media.

The large-scale anti-drug campaign known as the war on drugs was launched by Duterte in June 2016 as a follow up to his election promises to end drug-related crimes in the country. Since then, over 7,000 suspected drug users and dealers have been killed by Philippine National Police officers or unknown gunmen, according to Human Rights Watch. The campaign has been sharply criticized by the international community and human rights groups.