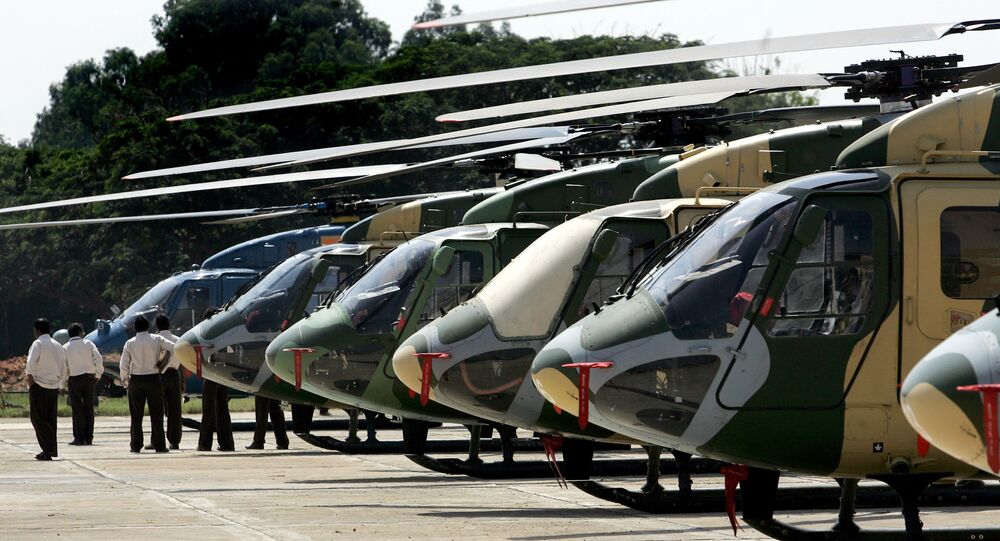 HAL has bagged a string of contracts from the Indian defense forces for trainer aircraft, utility helicopters, as well as integrating Su-30MKIs with BrahMos missiles, Dhruv helicopters and possibly the Russian-Indian FGFA.

New Delhi (Sputnik) — India's state-owned aerospace firm Hindustan Aeronautics Ltd (HAL) has called over 80 business partners from India and abroad to discuss possible collaborations on the various aircraft manufacturing opportunities that have recently come its way. HAL is looking to commence the production of indigenously developed trainer aircraft and light utility helicopters for the Indian Air Force next year.

"Given our large number of platforms with the Indian Defense Forces, we remain committed to increasing the scope of work to our vendors to ensure the success of our programs. HAL is looking to produce 100 basic trainer aircraft HTT-40 soon once spin tests are completed in the coming months. On the rotary wing segment, our efforts are to achieve basic certification of light utility helicopters by mid —2018," T Suvarna Raju, CMD, HAL, said on Tuesday.

This statement by HAL strongly hints that India may not go ahead with the proposed purchase of an additional 38 Swiss Pilatus PC 7 Mk1 trainers after the original order of 75 trainers, all of which have been delivered to the IAF.

Earlier, the IAF had rejected the HTT 40 program and selected the Swiss Pilatus PC 7 Mk1 trainer. But the Central Bureau of Investigation is presently probing allegations of money laundering and corruption regarding the 2012 deal with Pilatus. It was alleged that Pilatus had paid hefty kickbacks to some senior officials of the IAF and the defense ministry through an arms dealer, Sanjay Bhandari, who managed to hoodwink authorities by fleeing to London.

The HTT 40 is critical for the Indian Air Force's pilot training program, which is currently facing a severe shortage of trainer aircraft. The HTT 40 has completed wind tunnel testing in France and has undergone minor modifications for stall and spin tests.

Apart from these, HAL will be integrating 40 more Su-30MKI aircraft with the BrahMos supersonic cruise missile at its Nashik facility.

HAL is also expected to soon float a request for information to identify a private Indian agency capable of producing Dhruv helicopters in the future.