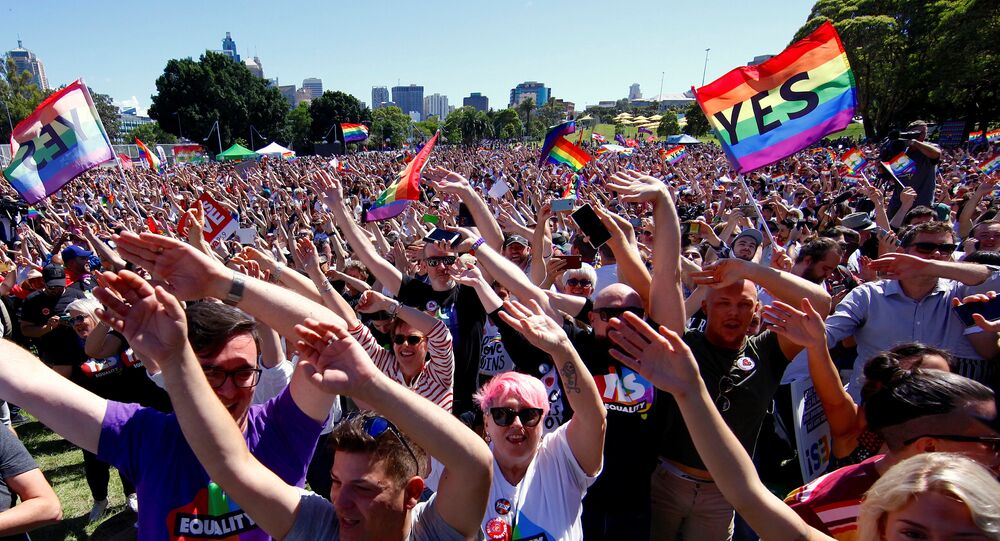 The results of the survey have marked a turning point in a long-time campaign for marriage equality in Australia. Prime Minister Malcolm Turnbull has said a bill to legalize same-sex marriage could be passed by the end of the year.

A majority of Australians voted in favor of legalizing same-sex marriage in a two-month national post survey. The results released Wednesday by the Australian Bureau of Statistics have revealed that 61.6 percent of the population voted yes and 38.4 percent voted no.

Turnbull also said that now it is up to the parliament to "get the job done" by the end of the year.

The people of Australia have spoken and I intend to make their wish the law of the land by Christmas. This is an overwhelming call for marriage equality. pic.twitter.com/PWZbH5H71r

​Although the survey is not legally binding, it is expected to pave the way for Australia to legalize same-sex marriage.

Alex Greenwich, a state lawmaker from New South Wales and the co-chairman of Australian Marriage Equality, said that the results of the vote delivered "an unequivocal mandate for Parliament to legislate  this bill as soon as possible, for a fair bill this year."

Thousands of marriage equality supporters took to the streets across the country, celebrating when the results were announced.

The moment they waited so long for: jubilant crowds celebrate the yes vote in Melbourne @CNN #ssm pic.twitter.com/Vb6Er5IH80

There have also been congratulations from around the world.

Congratulations Australia! Another important step toward equality for all. 🇦🇺 #MarriageEquality

Congratulations to Australia on their incredible show of support for #marriageequality! What an amazing achievement for the Australian LGBTIQ* Community.
❤️💛💚💙💜

​Australians have long been in favor of marriage equality, but authorities have insisted they wanted to keep the traditional definition in law. An attempt to hold a national vote under former Prime Minister Tony Abbott was unsuccessful due to a lack of funding. In August, Turnbull said a national mail survey would be held.

However, the decision was criticized by country’s LGBT community, saying that the matter should not be the subject of such a vote and has asked that the government  decide this question.